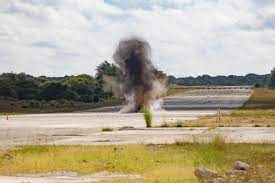 Residents of the Mariana Islands and the Republic of Palau are being assured that a major U.S military exercise being conducted in the region includes environmental mitigation measures when live fire is being used in the waters of Micronesia.

Organisers of Valiant Shield 2022, a biennial training event that involves every branch of the American armed forces, invited local media to ask questions about this year’s iteration during a conference Thursday.

Valiant Shield brings together members of the U.S. Air Force, Army, Coast Guard, Marines, Navy and Space Force to test joint operations against hypothetical threats “at sea, in the air, in space, on land and in cyberspace,” a media kit provided to reporters stated.

Two aircraft carriers — USS Ronald Reagan and USS Abraham Lincoln — along with their escort ships, are participating. So are the 94th Army Air and Missile Defense Command, Marine Expeditionary Forces, the Air Force’s 36th Wing, 15 surface ships, more than 200 aircraft, and an estimated 13,000 troops, according to the U.S. Pacific Fleet.

Palau’s involvement has been minimal since the exercise was first conducted in 2008. This year, military leaders were able to secure approval for holding parts of Valiant Shield in the republic, including the first-ever testing of the Patriot missile defence system there.

The unit conducting that live-fire exercise is well-trained, a point that was shared with members of Palau’s government, said Rear AdmiralRobb Chadwick II, director of the joint exercise control group for Valiant Shield 2022.

“They do these very regularly. In fact, they’ve done five in the last two years, and, in all of those, there were no safety issues or negative environmental impacts,” he said.

According to Chadwick, Palau’s inclusion and the Patriot testing help demonstrate U.S military personnel and assets can operate effectively “anywhere.”

Guam’s Micronesian neighbor is known globally for taking the lead on environmental policies, including banning commercial fishing in about 80% of its sovereign waters and requiring visitors to sign a pledge to act in an ecologically and culturally responsible manner.

It was something U.S military officials were aware of when negotiating the use of Palauan land and water.

“In terms of working with them, assuring them, … we have a history of doing these types of events, and being able to do them, again, safely with no negative impacts,” Chadwick said, adding he was “very appreciative” of Palau for agreeing to the proposal.

Mark Cruz, regional environmental coordinator for Joint Region Marianas, explained the process further, noting that negotiations with Palau’s government went all the way up to the nation’s president.

“Once he was willing to entertain this option, we worked with their staff to explain how the environmental processes work,” Cruz said. “A lot of it is education on what does this actually mean, what are the impacts associated with this. We were able to articulate those requirements. And they were pretty receptive to it, and realised that there are environmental control measures in place; safety is obviously a huge factor that we are considering. And once they took all that into account, recognizing the strategic (importance) of this, they allowed us to proceed.”

Mitigation measures include a preapproval process with federal regulators including the Environmental Protection Agency and the National Oceanic and Atmospheric Administration, to identify and cordon off appropriate areas on land or at sea to hold live-fire training.

Officials said debris remaining from the exercises is to be recovered. But Cruz clarified that much of the material is left behind because it isn’t feasible to find it or bring it back ashore.

For instance, before a decommissioned ship is sunk, a typical exercise during Valiant Shield, all hazardous materials are removed from the vessel, he said. But because of a ship’s size, and the front-end work to clean it out, the military is not required, nor does it intend to recover vessels torpedoed and bombed through approved “SINK-EXs.”

Fallout material that breaks off from missiles and other weapons, including bullets shot while in the open ocean, similarly are not recovered.

These activities, however, including what debris is allowed to be left behind, are all above-board, Cruz stressed.

“All this is under a permit that we obtain every five to seven years…that allows us to continue these operations, which includes impacts to the marine mammals and locations of these spots where we choose to conduct these kinds of exercises,” he said.

The waters around the Mariana Islands include these pre-approved spots.

“We recover what we can practically recover, like floating targets — stuff that remains that we can get,” Cruz said. “Obviously, if it sinks, we cannot recover it. So there’s a myriad of types of debris that we are able to take out, and some that we, unfortunately, cannot because it sinks to the bottom of the ocean.”

Palau, Guam and the Commonwealth of the Northern Mariana Islands should expect participating troops to be granted liberty, or shore leave, before they pack up and leave. Chadwick confirmed that local businesses can count on an economic ripple effect that’s normally associated with service members who are given time for rest, relaxation and recreation.

While most troops will remain offshore aboard one of two participating aircraft carriers, thousands are expected to enjoy liberty, an organiser of Valiant Shield told The Guam Daily Post.

“There’s always going to be that positive economic impact any time we have U.S forces in an area,” Chadwick said. “(Our troops) are going to be very busy during the exercise, but there will be time for them — for shore liberty. I’ve never been to Palau, but I understand it’s a wonderful place to be.”.