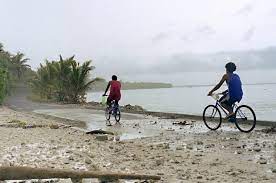 At COP27 there was a multitude of competing interests and voices that sought the world’s attention. But one thing that became clear was the chorus of small and often vulnerable states demanding justice now and at scale to address their concerns and the challenges they face. Despite the progress we have made in the 30 years since the first COP in Rio, the crucial issue of climate justice remains off track.

At its heart, climate justice aims to support the most vulnerable people and places who face the direct and most dramatic impacts of the climate crisis. It considers the outsized role that some actors have played in causing the crisis and their responsibility in supporting those most affected.

To address this injustice while also meeting ambitious targets to reduce carbon emissions to net zero, we will need an estimated four trillion dollars each year by 2030. This includes unprecedented investment in the deployment of technologies to speed the energy transition. However, climate finance flows in 2021 only reached around 630 billion dollars: just a sixth of what is required. Clearly, this is not sufficient, and it is skewed: private actors who are currently the main source of capital are operating in only a handful of countries.

While being home to a small fraction of the world’s population and contributing less than one per cent of greenhouse gas emissions, Small Island Developing States (SIDS) face an existential risk from climate change, for them climate justice is a matter of survival. And yet they remain consistently under-represented in access to climate finance, attracting only two per cent of the global total for 2013-2018.

And funding for the ocean is pitiful: Sustainable Development Goal (SDG) 14 is the least funded of all SDGs with less than 2% of the Green Climate Fund allocated to ocean actions. If we are to tackle climate change, we have no choice but to mobilise and scale up all sources of climate finance. Governments must play their part and keep their promises, but the private sector must too.

Developed nations historically pledged at COP15 in 2009 to provide US100 billion a year to less wealthy nations by 2020 to help adaptation and mitigation efforts. However, developed nations have fallen well short of fulfilling this promise and this systemic failure on the part of developed nations to honour their commitments strikes a discordant note. Despite the new promises and pledges, this unreliability has been well noted by those who were depending on that promise.

Climate funding shortfalls are dramatically exacerbating current economic hardships faced by Least Developed Countries (LDCs) and SIDS. The expected losses from climate change for SIDS are estimated to be up to 6.5 per cent of annual GDP, in stark contrast to a global average of 0.5 per cent. Although the historic outcome from the COP27 summit with the establishment of a loss and damage fund is a very welcome step, the threats faced by LDCs and SIDS continue to intensify.

At COP27, the Prime Minister of Barbados Mia Mottley made headlines with the ambitious Bridgetown Initiative, a policy systems initiative that aims to collaboratively work with stakeholders to redraw the global financial architecture to truly reflect vulnerability and breakdown many of the current climate-funding roadblocks for LDCs and SIDS.

Too often the debate on financing for climate change and other development issues is reduced to the limited analysis of raw GDP numbers or debt ratios rather than a more nuanced understanding of how economies work and the unique challenges faced by smaller more vulnerable nations. To contribute to this, debate the Commonwealth Secretariat launched its Universal Vulnerability Index (UVI) (2021) which is geared to capture more refined insights on the state of a nation’s vulnerability and resilience.

The UVI separates measurements for structural resilience and structural vulnerability, therefore putting less emphasis on the snapshot of nominal GDP and building in a flexible ranking of a country’s ability to rebuild.

The Commonwealth Secretariat is taking targeted action through initiatives such as the Commonwealth Climate Finance Access Hub a successfully tried and tested Commonwealth initiative to help small and vulnerable member states access to finance and scale up climate action. The Hub was launched in 2016 and has already supported member states to mobilise millions of dollars of climate finance with hundreds of millions in the pipeline.

Another recent project the ‘Their Future, Our Action’ project, is a collaboration between the Commonwealth Secretariat and the University of Cambridge’s Centre for Resilience and Sustainable Development (CRSD), embarks on ground-breaking action-based research to support the deployment of greater sustainability-related funds into SIDS by redesigning altogether how climate and resilience finance is accessed. The project has already borne fruit, unlocking more than $10 million USD of private financing for Small Island Developing States. A key outcome, so far, from the research, is the recognition of SIDS vast untapped assets in their young populations and in their natural assets which could be leveraged to catalyse greater climate finance flows into SIDS. A key part of the project is developing investment measures that reward SIDS for good stewardship of their natural assets.

If the world is to come together and tackle the real and pressing issues faced by LDCs and SIDS, it is essential that developed countries honour their commitments and pledges to deliver financing and the related technical assistance. Every promise needs to be kept and every option explored to enable the Commonwealth Member States – indeed all countries everywhere – to adequately deal with the immense task of climate change.

Because if we fail in this task, and fall into disharmony and discord, we will fail not just this generation but all future generations and inevitably see the diverse chorus of small and vulnerable states succumb to the worst effects of climate change and lose their voices forever.