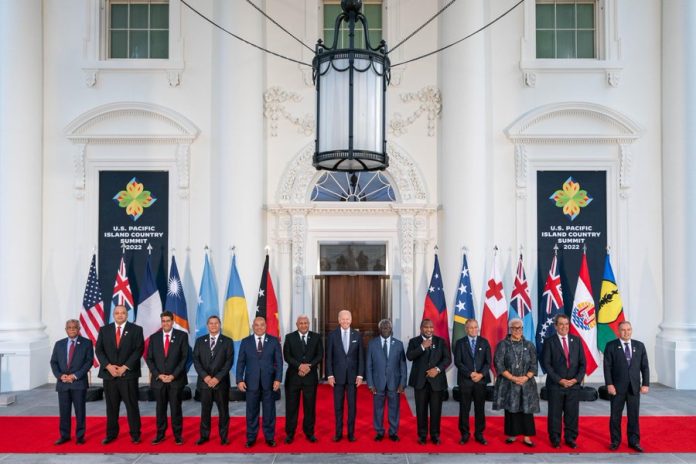 -Cook Islands Prime Minister Mark Brown says respect for their sovereignty was likely among the reasons why Pacific leaders accepted an offer of partnership from the U.S, after earlier shelving China’s.

“For many Pacific countries emerging from COVID, fighting climate change and with increased debt, we would be looking for support from all corners,” Brown told the ABC’s Pacific Beat programme.

“But the Chinese have a different approach to engaging with the Pacific, very much controlled by their agenda.”

Last week, Cook Islands was among the 14 Pacific Island states that endorsed the historic joint declaration with the US, in an attempt by Washington to counter China’s increasing influence in the region.

In May, China attempted to push through its own sweeping regional economic and security deal during Foreign Minister Wang Yi’s marathon tour of the region, but was unsuccessful.

It had been intensely negotiated and also got the backing of Solomon Islands, which had initially refused to get on board.

Brown offered a few reasons as to what could have persuaded Solomon Islands Prime Minister Manasseh Sogavare.

“It wasn’t just rhetoric. It wasn’t sugar-coating,” he said.

“We had full-on, face-to-face meetings with a very focused view on what the U.S needs to do to re-engage with the Pacific.”

He also noted that the statement was backed up by a “significant package” of resourcing and funds.

Prior to unveiling the declaration, US President Joe Biden’s administration announced it was ploughing more than US$810 million into a slew of new programmes across the region.

“Full credit to the U.S. They recognised that their absence over decades resulted in a vacuum in the Pacific that has been filled by countries like China and others that have assisted,” Brown said.

Sogavare is in Australia today and will meet with Prime Minister Anthony Albanese.

“Our relationship with Solomon Islands is incredibly important,” Prime Minister Anthony Albanese said in a statement.

Australia has been Solomon Islands’ largest development partner in several areas, including education, health and infrastructure.

However, an offer by Canberra last month to fund its next election led Solomon Islands to accuse Australia of “interference”.

Australia and the US have expressed growing concerns about China’s influence in the region after Solomon Islands signed a controversial security pact with Beijing earlier in the year.

Ahead of Sogavare’s visit, Solomon Islands Foreign Minister Jeremiah Manele broke the country’s silence on the U.S partnership backflip, saying the government endorsed the deal after references to China were removed.

“In the initial draft, there [were] some references that we were not comfortable with … but we were able to find common ground,” he told journalists in New Zealand on Tuesday.

Manele said Solomon Islands welcomed “the U.S re-engagement with the Pacific” but he also reiterated the nation’s support for China.

“Our security framework cooperation with China — and I think I have made this clear on a number of occasions — is basically based on a national security strategy that is domestically focused,” Manele said.

“Of course, we are guided by the existing regional security arrangements that we have in place … I can assure you, as I’ve assured others, that there is no provision for a military base in that agreement.”

“My belief and my hope is this: that the Indo-Pacific should be a region of peace, of cooperation and of collaboration,” he said.

“It should not be seen as a region of confrontation, of conflict and of war,” Manele said.

Tarcisius Kabutaulaka — an associate professor at the Centre for Pacific Islands Studies at the University of Hawaii — said he believed the Pacific nations had been in discussions with the U.S long before last week’s leaders’ summit in Washington.

“Some of these negotiations and discussions have probably been going on for a while behind the scenes, with officials talking about it,” he said.

“That’s different to China, who came to the talks trying to push its development and security pact with Pacific Island countries without that background work.

“”I would assume that some of that had been taking place not only when the leaders were in New York for the UN General Assembly, but perhaps even before that.”

Dr Kabutaulaka said the agreement signalled Washington’s return to working broadly with Pacific nations, but he was not sure it was “a success in the competition with China”.

“What I am certain about is that it is a success in terms of the U.S projecting itself and its multilateral relationship with the Pacific Islands,” he said.

“Pacific island countries and governments were successful in including in the declaration things that weren’t in earlier versions, like the 2050 Strategy for the Blue Pacific Continent.”

Dr Kabutaulaka said the new U.S declaration was unlikely to deter China, but Beijing would have to revise its pitch because “its diplomacy sometimes backfires”.

“I think China is going to come back,” he said.

“China is learning very quickly how to deal with Pacific Island countries, multilaterally.”

“It’s not as though there’s money waiting to be used for these things. This has to go through processes in Washington, so we’ll have to wait and see whether that money will become actually available for Pacific,” he said.

“It’s good to see that it’s put out there. And let’s hope that the U.S will be able to deliver on its promises.”

Whether or not the U.S followed through depended on the outcome of the U.S House and Senate midterm elections in November, Dr Kabutaulaka added.

“I am concerned that, if we have a Republican majority in Congress and if the Republicans were to take over [the] presidency in 2024, whether they will be able to or willing to commit the same political will,” he said.