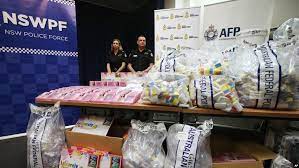 The Pacific islands are increasingly being used as a transit point for transnational crime, including drug trafficking and money laundering, experts say.

Criminal organisations from Asia and the Americas are exploiting limited law enforcement resources on these islands, and drug problems are rising on these tourist paradise locations, according to experts and local reports, mainly from Fiji and Palau.

The region is now said by experts to be the principal transit route for the trafficking of drugs and chemical precursors bound for Australia and New Zealand, where drug prices are high and methamphetamine and cocaine use has been steadily increasing.

However, experts say, this is only the beginning and things could get worse, as is happening in Thailand, where a meth pill now costs less than US$1, and a concerted regional effort is required to stop that from happening.

“They are not only looking to moving the drugs to very lucrative markets in Australia and New Zealand, but also moving drugs from the Americas towards Southeast Asia and Asia and precursors towards the Americas,” he said.

Santos said many Pacific island states lack capacity to patrol and enforce their borders. Consequently, he said, there has been an uptick in the movement of drugs through the region.

However, he said, indigenous criminal networks have also been created that work with transnational syndicates and facilitate their operations in the region, mostly Fiji, Papua New Guinea and Tonga along with Marshall Islands and Northern Marianas.

“This is something that we have not seen before and it is quite troubling,” he said.

For example, the U.S Treasury Department said in December 2020 that the 14K Triad, one of the largest Chinese criminal organisations in the world, has been active in the Pacific.

“A concrete example of the connection of major criminals and criminal interests to the Pacific is the case of 14K Triad senior figure Wan Kuok-koi, who also goes by ‘Broken Tooth,’” Jeremy Douglas, the regional representative of the U.N. Office on Drugs and Crime for Southeast Asia and the Pacific, told VOA.

“Kuok-koi has invested in Palau through his so-called Palau China Hung-Mun Cultural Association, which he controls,” he said.

Santos also said in the North Pacific, casinos and Chinese companies were established by transnational syndicates for money laundering and facilitate the movement of drugs while criminal groups in Mexico are moving cocaine and methamphetamine through the Pacific.

With more criminal groups and drugs coming their way from Asia and the Americas, local police on these Pacific islands are now busier with higher local crime rates.

“Fiji is a transshipment hub for hard drugs and these cases are identified through domestic law enforcement agencies coordination,” Assistant Superintendent of Police Maria Serukalou was quoted by The Fiji Sun in June as saying.

Serukalou also said there were 549 cases of money laundering recorded under transnational crime cases in 2018 while local statistics showed that roughly US$49 million is being laundered on the island annually.

Santos also said there has been a rise in the local production of methamphetamine in the Pacific.

This includes production by experienced meth chemists who were deported to the islands from Australia and New Zealand and have a connection to the syndicates for chemical precursors, and backyard chemists who use any chemical they can get their hands on to make the drug.

“At the moment in St. Giles Psychiatric Hospital in Fiji, 80 percent of mental health admissions are linked to methamphetamine,” he said.

Douglas said transnational crime in the Pacific is difficult to quantify to put a number or value on, but the threat is “very real” to the region and its small states, and it has recently become more of a threat.

He said the Pacific has been a transit zone for drugs and other trafficked commodities for a long time for the simple reason it is located between Asia and the Americas, but the situation has changed with increased connectivity and technology.

He said not only that the region is becoming a destination for powerful drugs like methamphetamine and cocaine, it is also becoming a place where criminals can take advantage of internet and banking infrastructure, and weak or out-of-date laws, to do business.

Douglas said the police in the Pacific have long been, and largely remain, focused on local policing and public order, both not surprising and needed, but they have to be more aware of external threat as well, he said.

“The world has come to the Pacific, and the police that protect it need to be aware of the threats,” he said.

“No region stays isolated from transnational crime threats for long —especially given how connectivity and technology have and are changing the nature of crime,” he said.

Aside from improving awareness, strategic intelligence, and setting policy, the region needs help to improve capacities and to connect and collaborate with agencies from outside the Pacific, Douglas said.

“The UN needs to step in and expand what we do given we are tasked with helping states and regions, and connecting them, to address transnational crime,” he added.

Santos said there is a lot that the Pacific can learn from Southeast Asia, as the Pacific is at the beginning of what Southeast Asia has been facing for decades and the tactics that are being utilized by transitional transnational criminal syndicates in the Pacific are not different from those being used in Southeast Asia.

He said that having greater exchange programs among law enforcement agencies of Americas, the Pacific and Southeast Asia would allow the Pacific to have a greater understanding of these syndicates’ tactics.

“In the Pacific, the problem is in the early stages and we can actually stop the syndicates from taking root so if we can learn the lessons from both sides, that would be critical,” he said