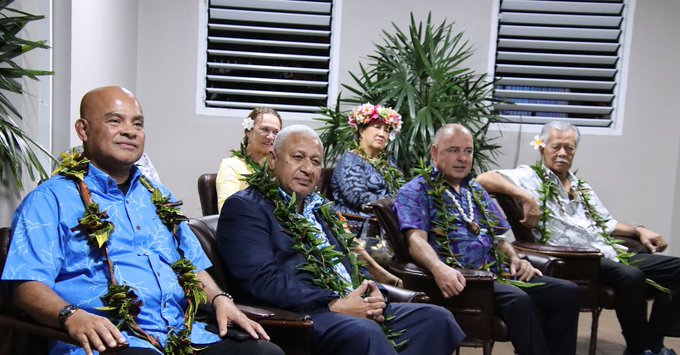 A Micronesian head of the Pacific’s regional political body says regional stability and security, and the China Economic and Security Deal will be on the agenda on Tuesday when some Pacific leaders meet in Suva, Fiji.

Several Pacific Island heads of state including at least three from the Micronesian states have arrived in Fiji for two days of meetings called by Fijian Prime Minister Frank Bainimarama.

This usually takes place ahead of the Pacific Forum Leaders Meeting which this year will take place in July.

The heads of the governments of Palau and the Federated States of Micronesia confirmed the TROIKA will meet with the Micronesian Presidents’ Summit (MPS) in the second of The Political Dialogue Mechanism, an initiative to allow for open conversation between PIF leaders.

When it last sat last year, the Political Dialogue Mechanism sought to address tensions within the PIF after the Micronesia President’s Summit threatened to pull out its membership of the forum, threatening regional stability for the first time.

The President of Federated States of Micronesia David Panuelo told RNZ Pacific in Suva, that the Micronesian leader’s main agenda was the tension over the way Micronesia was denied what long-standing regional tradition owed them, the seat of Secretary-General of the PIFS.

“This is exactly why we’re here and talks are ongoing, and nothing is really being resolved but we’re actively discussing this. This is a very good trip for our Micronesian brothers. Meetings are ongoing and today we will continue to discuss how we can get the best in terms of uniting and promoting regionalism,” President Panuelo said.

“We’re all optimistic until, without ruling out any possibilities. I think we are optimistic s let’s look forward to a successful conclusion of our ongoing meetings.”

Meanwhile, the President of Palau Surangel Whipps Jr said the two-day meeting would be the first time since the pandemic that Pacific leaders could meet in person which made it an “opportunity to invest” in good dialogue.

The Palauan president said Micronesian states had made clear their stance on the SG’s position and hope the leader’s meeting would “come up with a solution where we can all walk away from it with good understanding and rebuilding of that trust.”

“Well, I’m optimistic because we’re here. And we have the opportunity to sit down and discuss and find the best way forward,” he said

Palau, which like most of the Micronesian states has diplomatic relations with Taiwan instead of China hopes the Political Dialogue Mechanism would provide the space for Pacific leaders to “really share each other’s concerns and try to find a way forward where we can all be the winners.”

Micronesian states believe the Pacific Islands Forum as a political bloc was built on values of trust and mutual respect which needed rebuilding, implying the fragmentation created by tension over the SG’s position is further threatened by the emergence of China’s plan for its presence in the Pacific.

“I think what’s most important is regaining that trust and mutual respect among the Micronesians and the rest of the forum. That’s what’s most important. How do we rebuild that? That’s the question and I think that’s what the discussion over the next few days is going to be about,” Whipps Jr said.

“We are friends to everyone and enemies to none but we also lived through World War Two. When we see documents that say, you know, certain countries need to be taken or taken back, it brings us back to the time of where we were all involved in World War Two and we don’t want to relive that.”

“We are peaceful countries and we want to live in peace and harmony. That’s the value of the forum. It’s the Pacific coming together and sharing the same values and I think we all want peace and prosperity in the region.”

Samoan Prime Minister Fiamē Naomi Mataʻafa has also arrived in Fiji for the meeting and the opening of a new Samoan High Commission in Suva.

The Cook Islands Prime Minister Mark Brown is also in Fiji and opened a new high commission in the Fijian capital.