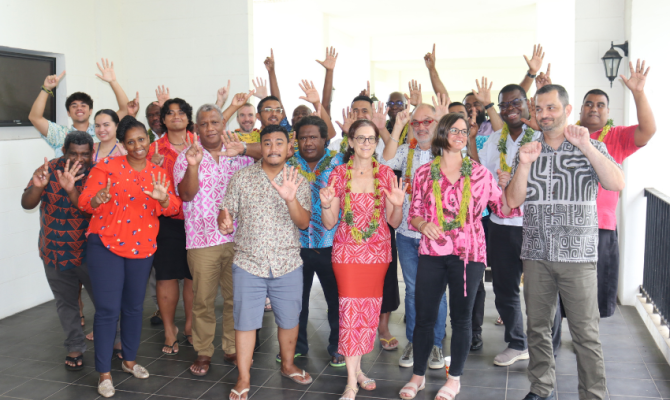 The first physical meeting of the Pacific Island Regional Climate Centre (RCC) was commissioned in Apia with a call on delegates to work together in the Pacific Way to find solutions to help the region overcome the “climate emergency.”
The call came from the Director General of the Secretariat of the Pacific Regional Environment Programme (SPREP), Sefanaia Nawadra, during the opening of the three-day Pacific Regional Climate Centre (RCC) Network Coordination Committee meeting held at SPREP’s Headquarters at Vailima, Samoa.

The meeting for the Pacific RCC-Network to update its work plan, and consolidate the governance arrangements so they could serve the Pacific region better, is the first physical meeting of the Network since its designation to be in a demonstration phase in 2017.

Although there were ad-hoc virtual meetings in between to bring together RCC-Network Node Leads and consortium members to facilitate a common understanding of the RCC functions and discuss the progress of the Implementation Plan, the meeting in Samoa has brought together Met Services Directors to provide feedback and inputs relevant to some of the objectives of the RCC.

The SPREP Director General said the meeting not only fulfils the decisions made by the World Meteorological Organisation (WMO) but also calls from members of the Pacific Met Council (PMC) and Pacific ministers.

“I know challenges will be faced by the RCC as you sort effective ways of operating as a network servicing our blue Pacific continent. Our region appreciates your commitment and you are a key part of the response in a region where our Leaders have declared a climate emergency,” said Nawadra. “As your Secretariat to the PMC with WMO, I ask that you work together in the Pacific Way; it has worked well for us in the past – we always get through it together. When we continue to work together as a family, we can address all things.”

Dr Luteru Tauvale, of Samoa, representing the Chair of the PMC, echoed Nawadra’s sentiments, noting that the Pacific RCC is now in a demonstration phase for five years.

“We have come a long way over the past years, and we will continue to grow. Partnerships have been a key part of our progress, we are thankful for these and the opportunities we have to grow even stronger,” Dr Tauvale said. “I hope that with this project, working together with existing projects and technical partners of the RCC, we will be able to move from a demonstration phase to being fully operational.”

The WMO representative for the South-West Pacific, Henry Taiki, on behalf of the WMO Secretary-General, Professor Petteri Taalas welcomed the participants to the Pacific RCC-Network Coordination Committee meeting, reaffirmed the importance of the meeting and WMO support to the National Meteorological and Hydrological Services (NMHSs) in the region.

Regional Climate Centres (RCC) are Centres of Excellence that assist WMO Members in a given region to deliver better climate services and products, including regional long-range forecasts, climate monitoring and climate data services, and to strengthen the capacity of NMHSs to meet national climate information needs.

The primary ‘clients’ of an RCC are NMHSs in the region and in neighbouring areas. RCC responsibilities are regional in nature and do not duplicate or replace services provided by NMHSs. RCCs serve the regional level of a three-level infrastructure represented by the Climate Services Information System (CSIS) pillar of the Global Framework for Climate Services (GFCS): Global Producing Centres (GPCs, global level), Regional Climate Centres (RCCs, regional level), NMHSs, national level.

The meeting is supported by the Intra-ACP Climate Services and Related Application (ClimSA) Programme. ClimSA is funded by the European Union’s 11th European Development Fund (EDF-11) and takes place within the framework of an existing Financing Agreement between the Organisation of African, Caribbean and Pacific States Secretariat (OACPS Secretariat). The programme has been approved for a total of EUR 85 million and distributed in the various ACP regions and aims to strengthen the implementation of the Global Framework of Climate Services (GFCS).

The main implementation partners of the Programme are WMO and the Joint Research Centre (JRC).

SPREP is the lead for the Pacific region to implement activities under the ClimSA programme. One of the main deliverables of the project is to support the Pacific RCC Network to move from its demonstration phase to a formally designated WMO RCC Network.

Director General Nawadra said SPREP is pleased to host the Secretariat of the PMC and WMO within the Pacific Climate Change Centre.

“I want to especially thank Professor Taalas for being such a wonderful friend of the Pacific. The WMO’s commitment to the Pacific and Professor Taalas ongoing support and continuing to stand by us as we address our climate emergencies is vital to the survival and well being of our communities. SPREP and the PCCC is committed to supporting the ongoing development and work of the RCC,” he said.

After decades putting the brakes on global action, does Australia deserve...

As incoming Chair of AOSIS, Samoa lays the groundwork at COP27,...