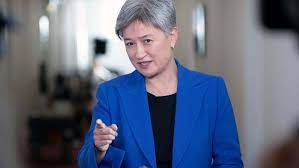 Australian foreign Minister Penny Wong said she looked forward to Australian ships continuing to visit the Solomon Islands amid an exemption from a ban on foreign vessels.

Senator Wong was asked about “where are we at with the ship blockade” with the Solomon Islands while speaking to reporters at Parliament House on Tuesday but took issue with the way the question was worded.

“Let’s be careful in our use of language. I don’t think that’s an accurate reflection,” she said.

“I think there has been an indication from Solomon Islands that obviously that they are making decisions about ship visits and we look forward to… Australian ships continuing to visit.

“And I understand from public reports that will continue.”

Sogavare’s office had been wanting more detail about vessels from countries including Australia and the United States that are involved in targeting illegal fishing.

But Sogavare said the ban was “not targeting the United States of America”.

The moratorium came just months after the Solomon Islands signed a security pact with Beijing, which sparked fears China would establish a military base on Australia’s doorstop.

Sogavare is set to visit Australia in the coming weeks, as the Albanese Government continues to emphasise the nation’s place as the security partner of choice for Pacific nations.

“We are of the view, Australia is of the view, that security is best provided by the Pacific family, of which we are a part,” he said.