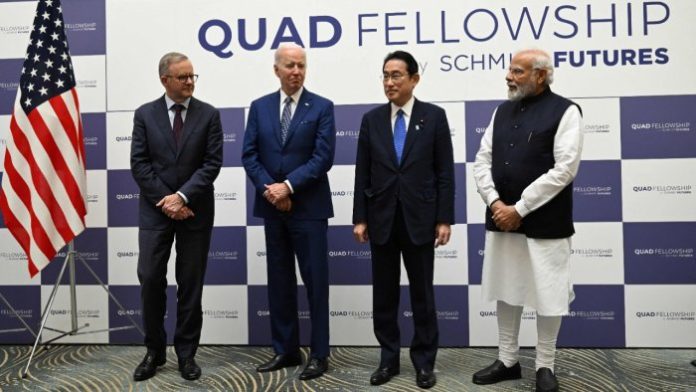 The leaders of Japan, the United States, Australia and India on Tuesday vowed to extend more than US$50 billion in infrastructure aid and investment in the Indo-Pacific over the next five years, while making clear that a change of status quo by force anywhere is unacceptable in the wake of Russia’s war in Ukraine.

The message that came out from the in-person summit of the Quad group, the second of its kind, reflected the four countries’ renewed push for a “free and open Indo-Pacific,” as Russia’s military aggression heightens concerns over a similar situation occurring in a region where China has grown assertive.

The Quad summit was hosted by Japan for the first time, a country increasingly challenged by China’s territorial claims in the East China Sea, North Korea’s nuclear and missile threats and a long-running territorial dispute with Russia.

It also took place as cohesion among the four Indo-Pacific democracies is being tested by Moscow’s aggression, as India historically has close ties with Russia and stood out among the rest of the Quad members by not explicitly condemning its war.

Japanese Prime Minister Fumio Kishida, speaking at a press conference after chairing the meeting, hailed the four countries coming together to send a message to the world that they would “not tolerate a unilateral change of status quo by force in any region”

The Quad leaders also shared their concerns over the “tragic” Ukraine conflict, while affirming the need to respect sovereignty and territorial integrity, Kishida said.

But in an apparent consideration of India’s neutral position on the Ukraine situation, a joint statement issued by the Quad leaders did not even mention the word “Russia” and avoided any explicit accusations against Moscow over its invasion.

At the outset of the meeting, U.S. President Joe Biden, who has visited Japan as part of his first trip to Asia since taking office, said that the Ukraine crisis “only heightens the importance” of ensuring a “free and open Indo-Pacific.”

Kishida, Biden and Indian Prime Minister Narendra Modi, meanwhile, commended the attendance of Australian Prime Minister Anthony Albanese, who flew to Japan to attend the meeting in Tokyo within hours of being sworn in as his country’s new leader.

Albanese, who returned his Labor Party to power for the first time in nine years, assured his counterparts that the new Australian government remains committed to the Quad.

The Quad is widely seen as a counterweight to China’s growing clout in the region. But members have emphasised that it is a group promoting what it calls “practical cooperation” in areas such as coronavirus vaccines, infrastructure, climate change and critical technologies.

In a bid to deliver “concrete results” to contribute to the region, the Quad announced on Tuesday a new maritime initiative to help countries track illegal fishing and monitor other activities in their waters.

Under the “Indo-Pacific Partnership for Maritime Domain Awareness,” the Quad members are committing to offer a faster, wider and more accurate maritime picture of near-real-time activities in regional waters, according to the U.S. government.

The benefits of such a picture include an improvement in partners’ ability to protect their fisheries and respond to climate and humanitarian events.

There is demand from countries in the Pacific and elsewhere to improve their ability to “know what is happening” in their territorial waters and exclusive economic zones, a U.S official said.

The joint statement, meanwhile, seemed to take on a tougher tone on Chinese maritime assertiveness than before, with the Quad leaders saying they “strongly oppose any coercive, provocative or unilateral actions” that increase tensions in the East and South China seas.

The statement cited “the militarisation of disputed features, the dangerous use of coast guard vessels and maritime militia, and efforts to disrupt other countries’ offshore resource exploitation activities” among issues that concern the Quad group.

Beijing has been militarizing disputed features in the South China Sea and carrying out repeated incursions into Japanese waters around the Senkaku Islands, a group of East China Sea islets controlled by Tokyo but claimed by Beijing.

China is also believed to be closely watching developments in Russia’s invasion of Ukraine and the response to the war from the United States and its allies to build its strategy toward Taiwan — a self-ruled democratic island that Beijing views as a renegade province to be reunified with the mainland, by force if necessary.

The Solomon Islands came under scrutiny due to a recently signed security pact with China, which has raised fears that Beijing would further increase its military influence on the Pacific nation.

The Quad engagement has moved to the leaders’ level under the Biden administration as it seeks to rally U.S. allies and like-minded countries to counter China. The leaders held their first in-person meeting in September in Washington.

The four leaders on Tuesday agreed to hold their next in-person summit in 2023, hosted by Australia.