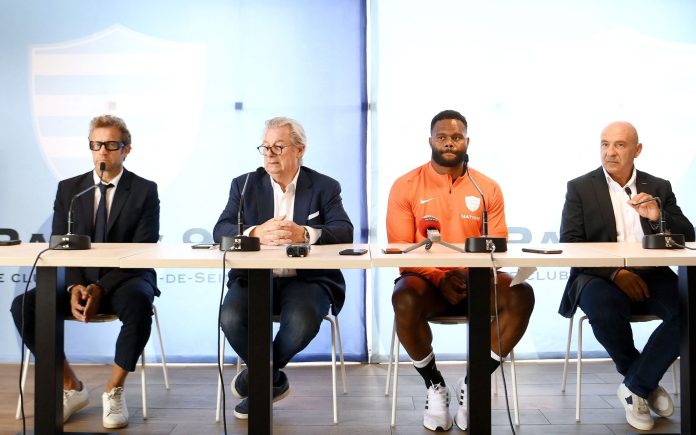 France coach Fabien Galthié could not hold back tears as Racing 92 confirmed that star centre Virimi Vakatawa had been forced to end his rugby career “for cardiological reasons”.

At an emotional press conference on Tuesday, Galthié saluted the 31-cap France international as “formidable” and as someone who “made children dream”.

“I wanted to come here today to pay homage, in the name of French rugby, for all that [Virimi] has done,” Galthié said.

“Destiny has dictated that Virimi played his last two games for Les Bleus in Japan. He has been a key player in our adventure, in our history; he has been formidable.

“hose last two matches, he was with us in Japan. He was again incredible. This example, we must share it with our children and tell them to play every game as if it were their last.”

Racing 92’s club doctor, Sylvain Blanchard, said that a “cardiological anomaly” had been found in 2019 “just before the Rugby World Cup in Japan”. It had been monitored closely by the Parisian club’s medical team but its “pathology had evolved” since. Blanchard added that the issue is not rugby-specific and that it could place Vakatawa, 30, “in danger in any kind of high-intensity sporting practice”.

Vakatawa, who arrived in France in 2010 and represented both Racing 92 and the France sevens team, said tearfully: “Thanks all for coming today. It’s complicated for me to be speaking in front of everyone but I thank Fabien, the President [Jacky Lorenzetti] and Toto [Laurent Travers, Racing 92’s coach] for being here.

“Rugby is my passion. The hardest moment of all of this was yesterday in front of my team-mates. It was very difficult to tell all those with whom I’d spent time both on and off the field.”

On Monday, French rugby had been rocked by the mystery news surrounding Vakatawa, whose French professional career was abruptly ended by the Ligue Nationale de Rugby’s medical committee.

With such little information emanating from Paris, there had been hopes that Vakatawa might be able to continue his rugby career abroad, following in the footsteps of Juan Figallo and Christopher Tolofua who both moved to the Premiership after suffering ‘G3′ neck issues, an injury which prohibited them from playing in France, but not England. Sadly, however, Vakatawa had no such luck.

Despite losing his place in the France XV, Vakatawa started for a much-changed Les Bleus in July in the two-Test series against Japan and featured in the French-heavy Barbarians’ victory over England at Twickenham in June. The centre was left out of Racing 92’s squad for their season opener, a victory over Castres last Saturday. He scored 10 tries for his country after making his debut in 2016 against Italy, and played in the 2019 Rugby World Cup.