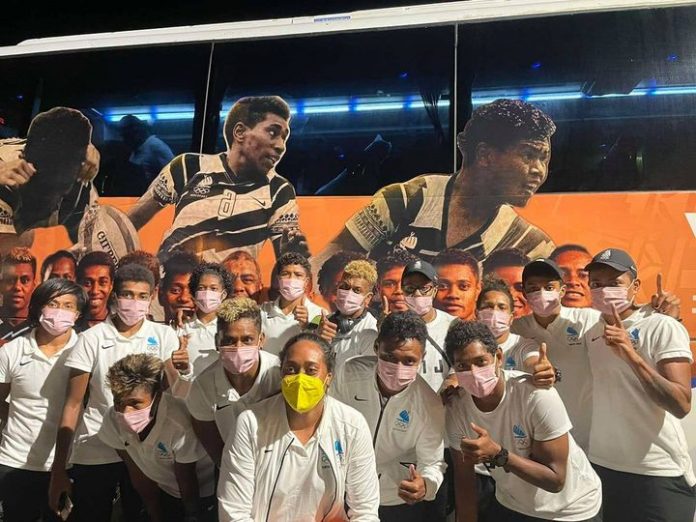 The Tokyo 2020 bronze medallists had been upgraded to business class for the final leg of the journey from Sydney, and images posted on social media showed players tucking into celebratory cake and posing for photos with delighted cabin crew.

Rusila Nagasau, who took part in the Games’ closing ceremony on Sunday, and her groundbreaking team-mates must now complete two weeks of quarantine before they return home to friends and family they have not seen since April.

But, as the squad heads into isolation the players should be comforted by the fact that their success in Japan could prove transformative for women’s sport in Fiji.

Five years ago, in the wake of the team’s run to the medal quarter-finals at Rio 2016, the country experienced an increase in the number of women and girls who wanted to play sevens.

Having become the first women to win an Olympic medal for Fiji, the signs suggest that the team’s exploits in Tokyo could have an even bigger impact.

“Straight after that bronze medal win I had hundreds of calls from girls in Fiji and Fijians overseas wanting to come and join the Fijiana,” coach Saiasi Fuli told Radio New Zealand last week.

“That is the positive impact of this Olympic tournament and it motivates and encourages young girls in Fiji to take up the sport of rugby sevens and increase the number of women’s participation in Fiji.”

That is a sentiment shared by Chris Cracknell, who coached the Fijiana in Rio. “The fact that they’re being rewarded and recognised for what they’ve achieved is fantastic,” he told World Rugby.

“They’ve also been awarded a bonus for coming home with a medal as well, which just shows how much things have moved on, so to speak, from a couple of years ago when they wouldn’t have been seeing those rewards.

“It’s inspirational, not only for the kids back on the island, but if you look at the depth of the story, it could be inspirational for the girls around the globe.

“If you look at their stories and their backgrounds and where they’ve come from, what they’ve overcome and why they’re pushing themselves, it’s an amazing story.”

Captain Nagasau, who started playing rugby in 2007 after being invited to a training session by a friend, has spoken previously about the “comments” she and others were subjected to for daring to play what was considered a man’s game.

Cracknell had travelled to Fiji as part of Ben Ryan’s coaching set-up with Fiji’s men, and having accepted to work as director of rugby for the women alongside that role in 2015, was confronted by those negative attitudes.

“My second training session we held down at the university because at that point we hadn’t had the opportunity to get the girls into a full-time environment,” he said.

“The girls were heckled throughout the entire hour-long session that we held for them. Now at the time I didn’t speak particularly fluent Fijian, but it didn’t take a rocket scientist to work out what was being said.”

Cracknell added: “It showed the attitude of the girls in that they just used that to spur them on, and they just wanted to always prove people wrong the entire time, because everyone measured the boys as the shining light and the girls wanted to emulate them.

“But, at the same time, wanted to put a marker out for themselves and thus change the perception of women and female athletes in the country.”

The players were able to do that in Rio, where a creditable eighth-place finish led to an uptick in participation back home, but by 2019 the team was beginning to struggle on the World Rugby Sevens Series.

That is when current coach Fuli came in, and the Fijian cast his net far and wide for new players while reintroducing a number of measures that had initially been put in place in the build-up to the previous Olympics.

Diet was a particular focus, and carbs, sugar and milk were banned — outside of one cheat meal per week — while mobile phone use was only allowed on the weekends.

COVID-19 restrictions, and the worsening situation in Fiji, meant that the squad was required to bubble together at the beginning of April.

Fuli was concerned a lack of domestic competition could hamper the Fijiana’s chances in Tokyo. Only four teams, two of which were made up of national 15s players, played in the Fiji Rugby Super Sevens Series earlier this year.

However, an early sign that the squad would be competitive in Tokyo arrived at the Oceania Sevens in Townsville in June, where the Fijiana beat defending Olympic champions Australia and ran New Zealand close.

For several members of the squad, the trip to Australia had been their first time on a plane. But, despite the challenges of travelling internationally during a global pandemic, the team showed little sign of rust when the women’s Olympic sevens tournament got under way at Tokyo Stadium.

Fiji opened with a narrow loss to eventual silver medallists France before making a statement with victory over Canada, who had finished third in Rio.

Reapi Ulunisau, a former netball player with no World Series experience, scored an Olympic record four tries as Brazil were beaten 41-5 before Australia were defeated again, this time in the medal quarter-finals.

Ulunisau also scored in the semi-final against New Zealand, but the Black Ferns Sevens snuck through in sudden-death extra-time.

That left Great Britain standing between Fiji and an Olympic medal. “In 2016, we lost to Great Britain in the main quarter-final and it was heartbreaking,” Viniana Riwai, one of five survivors from Rio, told the Fiji Sun.

“I told myself that I’ll make it to Tokyo and avenge that loss.” Two tries from Alowesi Nakoci helped deliver victory, a modicum of revenge and a medal.

“It’s a massive, massive achievement. The efforts shown by our girls. It was a tough, tough journey,” Fuli said after the bronze medal match.

“For the long-term, we need to try and promote the game, develop the game for more girls to take rugby for their sport in Fiji.

“This is the impact that will influence young girls in Fiji to play rugby. That is the message I send to the girls — we are here to encourage and empower and promote the game to girls in Fiji.”

Rugby could not wish for better ambassadors than the fantastic Fijiana.