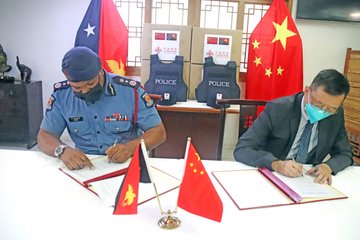 The Chinese government has pledged to build a national narcotics laboratory in the country to boost the capability of the Royal PNG Constabulary amidst growing transnational organised criminal activities in the country.

The transitional crime network has already created threats on the PNG sea borders and in the Pacific, whether it is drug trafficking, people smuggling, environmental crimes or cybercrime.

Chinese Ambassador to PNG Zeng Fan Hua said this year, China will help PNG build an anti-narcotics laboratory to be used for testing of suspicious drugs and illegal items getting into the country.

Police Commissioner David Manning said for the constabulary, this assistance allows us to not only deal with the current narcotics challenges that they face today, but assist in other areas as well.

He said PNG is a member of a larger community and what they have seen in the past shipment of dangerous drugs such as cocaine where PNG is being used a transit point for such illegal activities.

“The building of the narcotics laboratory is a sign of the future and will place the police and other enforcement agencies in a good position,” Manning said.

“Not only will we be able to test suspicious substances, but also be able to present those results in securing convictions (in court).”

He thanked China, Australia and United States of America who continue to assist in increasing the capacity and capabilities to meet demands and expectations of the people.

Saying China ‘bought’ a military base in the Solomons is simplistic...