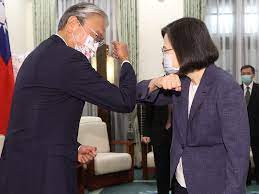 Calling China’s launches of ballistic missiles in its recent military exercises earlier this month “unacceptable,” Japanese parliamentarian Keiji Furuya, who is on a three-day visit to Taiwan, said Tuesday during a meeting with President Tsai Ing-wen that Beijing’s ambition of changing the status quo in the Taiwan Strait must be stopped.

Furuya, chairman of the Japan-ROC Diet Members’ Consultative Council, compared China’s recent military exercises near Taiwan to Russia’s invasion of Ukraine at the end of February, which many Western countries have criticised as unprovoked and unjustified.

China used U.S House Speaker Nancy Pelosi’s Taiwan visit as an “excuse” to launch large-scale military exercises around Taiwan, firing ballistic missiles that landed in Japan’s exclusive economic zone (EEZ), said Furuya, who is a senior member of Japan’s ruling Liberal Democratic Party and has been a Diet member since 1990.

The Japanese government said five of the 11 ballistic missiles that the Chinese military fired on 05 August landed in the country’s EEZ, suggesting that some of them might have flown over Taiwan.

This act of “military intimidation” was “unacceptable to both Taiwanese and Japanese people,” Furuya said, adding that the U.S, Japan, and other like-minded countries must work together to stop China’s ambition to change the status quo in the Taiwan Strait.

Meanwhile, Tsai said China’s military exercises around Taiwan had threatened the stability of the Indo-Pacific region.

She called on democratic countries around the world to work together to tackle the “expansion and provocation” of authoritarian regimes.

Describing Japan as Taiwan’s partner in security matters, Tsai said both countries should enhance collaboration in the face of increasing challenges that could undermine the stability and prosperity of the Indo-Pacific region.

According to Furuya, part of the efforts to counter China’s growing influence in the region is to engage in dialogue and cooperation with Pacific island states and offer assistance that truly benefits the life and wellbeing of their people.

This includes rolling out vocational training programmes for the people of the Pacific island nations and holding discussions on economic and security issues at the triennial Pacific Islands Forum Leaders Meetings, he said.

In the meantime, Furuya said Japan had warned Pacific island countries against falling into China’s “traps,” referring specifically to Beijing’s alleged overburdening of small and impoverished countries with excess loans that they could not repay.

Kiribati and the Solomon Islands are among the eight countries that have cut ties with Taiwan in favor of China since Tsai took office in 2016, leaving the current allies of the Republic of China, Taiwan’s official name, at 14.

Furuya arrived in Taiwan on Monday for a three-day visit with Minoru Kihara, secretary-general of the 260-member Japan-ROC Diet Members’ Consultative Council, which has been promoting Taiwan-Japan relations.

MP Kenilorea calls for calm ahead of no confidence motion