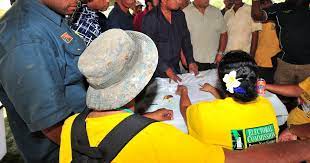 Nine days from the scheduled date for the return of writs, some Papua New Guinea election officials are worried that they will miss the deadline because of the ongoing disruptions to the counting process by candidates.

In the National Capital District, the Returning Officer for Moresby North-West Vincent Manukayasi said he feared that counting might not be completed in time for the return of the General Election 2022 (GE22) writs on Friday next week.

Counting was suspended at around 1am yesterday when the candidates submitted a petition requesting:

*A live streaming of the counting;
*Proof that the closed circuit television (CCTV) installed by the Electoral Commission was 100 per cent operational and functional;
*That all the boxes to be recounted after the installation of the live streaming telecast;
*That the presiding officers’ journals be made available to their polling teams to confirm the total number of ballot boxes.

Manukayasi said counting was suspended when they started on Ward 1 and Ward 26.

“That’s just two wards. We have gone into the third day of counting and we only have nine days left,” he said.

“With the continuous interruptions from the scrutineers and their candidates, I am afraid that we might not be able make the deadline for the return of writs.”

Candidates’ spokesman Isaac Lupari said there was evidence that boxes from Ward One had been tampered with.

Female candidate Anna Kavana Bais said all the candidates were calling for was a free and fair election.

“Election is the true test of democracy,” she said.

“From day one we have been calling for live streaming.”

In Manus, counting was suspended after concerns were raised on some ballot boxes brought in from Aua Wuvulu.

Scrutineers requested the provincial election steering committee for a recount of the 13 ballot boxes.

In Enga, candidates contesting the Lagaip Open seat have petitioned the electoral commission to declare a failed election there because they claim that proper procedures had been bypassed.

Martin Lakari, the spokesman for the 33 candidates, said the petition was on behalf of the voters and candidates who were deprived of their rights to vote on 08 July.

“No ballot boxes reached the designated polling places,” he said.

“The entire Lagaip populace turned away in bitterness.”

The other 44 were unmarked and forcibly taken away.

Meanwhile, Madang Governor Sir Peter Yama has demanded from the PNG Electoral Commission, the government and Governor-General (GG) with authorities to tell the truth whether there is ample time for a new government to be formed.

Sir Peter said government authorities involved did not give party leaders enough time and he was fearful time was running out for parties to see which one would be called upon to form government.

“I am a leader of a party, Madang is still polling as we speak, many ballots not picked up yet from remote areas, I don’t have enough time to scrutinise parties to join to form government,” he said.

“The issue here is whether the Governor-General has given enough time to see which party has the number and will be asked to form the government. Is there enough time to lobby and for the right government to come into play?

“The GG, does he have enough time? That’s the very fundamental issue here now.

“How do we explain when some are already declared and now are waiting for others to be declared?

“I mean, look at PNG, counting has not started in many or some are still polling. Do we have enough time?

“Look at Madang, where we are still polling in Rai Coast, Usino Bundi and Middle Ramu.

“So the question here is that in the Highlands there is some things are run down where it warrants failed elections while some other parts of PNG are still polling, and the list goes.

“So the question is, with 9 days to go and polling still going, what opportunity do we have to form the government? Which party will have the highest number, when do we go into formation, what ample time did PNGEC give to party leaders and parties to check out parties and candidates, when do we go to and to lobby for the prime ministership, which party should we be talking to?

“It is very unfair, it is very one sided and it is not right because when we started the game, we all should be given all time.

“All should have enough players and opportunity for all the leaders to endorse candidates, campaign for them and then we expect EC to bring them home safely,” he said.