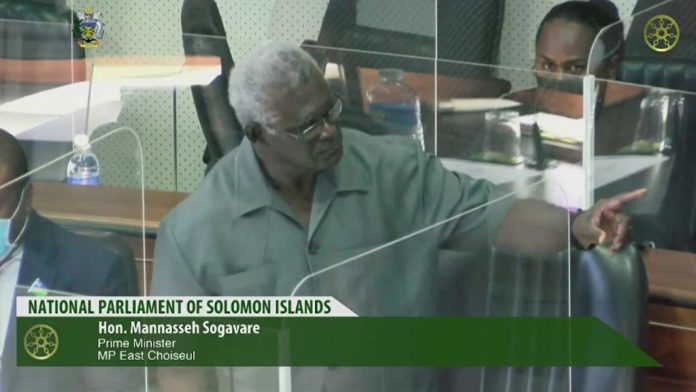 The Solomon Islands parliament has voted to delay the country’s national elections to 2024, backing a push from Prime Minister Manasseh Sogavare to postpone the poll until after the Pacific Games next year.

The bill to delay the poll for seven months passed parliament with 37 votes in favour to 10 against.

Elections in Solomon Islands are meant to be held every four years and parliament is due to dissolve in just six months.

But Sogavare maintains he needs to delay the election until after the Pacific Games in late 2023 because his country does not have the financial resources to hold two major events in the same year.

“This bill comes at the cost of the voters’ right to exercise their votes at the general election in 2023,” he said before it passed parliament.

“There is no popular electoral mandate for this bill. That’s the fundamental problem with this bill. This alone should have given [the government] pause.”

Earlier, Sogavare mocked Australia while declaring he will take up the government’s offer to help fund the next national election – but only after his country had voted to push it back.

Sogavare on Thursday repeated his attack on Australia’s offer to fund elections scheduled for next year, telling parliament he still saw it as “an attempt to directly interfere in our domestic affairs”.

The offer came in the middle of an acrimonious parliamentary debate over the delay, with the opposition accusing Sogavare of searching for excuses to hold onto power.

The Prime Minister told parliament he would accept Australia’s offer, but his government remained determined to delay the poll until after the Pacific Games in November next year.

“If this bill is passed then we look forward to Australia’s offer to assist us in funding the pre-requisite electoral reforms and the conduct of the national elections,” Sogavare declared earlier on Thursday.

“They’ve offered now, so you get ready, brother, to fund the costs. It’s a big cost, the Electoral Commission needs a lot of money.

“So you offer, you must prepare to give the money that you said you want to offer us!”

Foreign Minister Penny Wong on Wednesday denied that Australia was trying to interfere in Solomon Islands politics by offering to help fund the elections, stressing that the assistance would be available for a poll in either 2023 or 2024.

The federal opposition has also ramped up its criticism of the government’s handling of the election funding offer, with Shadow Foreign Minister Simon Birmingham accusing Labor of making tactical missteps.

“The handling of this funding offer to the Solomon Islands has, at best, been cack-handed,” he said.

“By acting too late, making the offer public without basic courtesies of forewarning and their lack of response to the Solomon Islands’ subsequent concerns, the Albanese government has made a difficult situation worse.”

The debate had been called with less than a week’s notice, with the Prime Minister dodging a parliamentary committee hearing where opposition MPs and civil society groups could weigh in on the bill.

Security was increased and businesses were shuttered in the capital Honiara on Thursday with fears the debate could stoke fresh instability in the Pacific Islands country.

Solomon Islands resident Millicent Barty, who considers herself a social activist, was concerned by the lack of public consultation and dialogue.

She is discouraged by the state of democracy in the country, saying it has become “messy” and people are confused.

“We see that the bond between people and their representatives has over time just been breaking down,” she said.

“I feel that people don’t believe that participation is worth the effort. Or that their vote actually mattered or matters.

“It’s come to a point where a majority will just say, you know, ‘why bother?’”

She was also “shocked” that the Pacific Games would take priority over the national election.

“It will only run for two weeks and it’s prioritised above our democratic rights,” she said.

Solomon Islands Business Magazine publisher Robert Iroga said Solomon Islanders have been opposed to the idea to extend parliament since it was first announced.

“The Solomons Christian Association is basically opposed to an extension, then we have the Chamber of Commerce where 70 per cent don’t support any extensions,” he said.

“And based on what is coming out of social media, [there] is basically widespread opposition to the proposed amendments.”

Iroga welcomed Australia’s offer to fund the elections and did not see it as interference.

Barty agreed that support was needed and thought that the language used by the government in response to Australia was “a bit far-fetched”.

“In cases where we need to defend democracy and uphold the principles of democracy, I actually feel we need international support,” she said.

It comes after the country controversially signed a security pact with China earlier this year and ordered the national broadcaster SIBC not to report content criticising the government.

Iroga has been following Sogavare’s career since the 1990s and said he has definitely recognised a shift.

“I think a lot of people would link him to the kind of leaders he associates himself with now,” he said.

“I have noticed Sogavare has really changed in the last few years as leader, and he’s been very strong with the anti-sentiments on the Western governments like Australia,” he said.