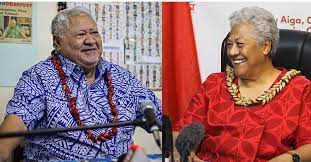 Her Faatuatua i le Atua Samoa ua Tasi (FAST) party is on the cusp of a major upset after Friday’s vote, leaving Samoan Prime Minister Tuilaepa Sailele Malielegaoi fighting for his political life after 22 years in office.

The result is even more extraordinary because FAST has managed to challenge one of the world’s longest-serving democratically elected leaders just nine months after the party was formed.

Mataafa said that she was feeling “very thankful” for the support FAST has received, with preliminary results showing it deadlocked with the ruling Human Rights Protection Party at 25 seats apiece in the 51-seat Legislative Assembly.

That leaves lone independent candidate Tuala Tevaga Iosefo Ponifasio holding the balance of power, with the ability to choose Samoa’s next leader.

Mataafa said she would open discussions with Ponifasio yesterday, but it could be weeks before an outcome is known, as a result would likely face legal challenges.

She said even if FAST fails to win government, the level of support for a female-led party was a game-changer for women.

“I don’t think it’s just [becoming] prime minister, it’s in any field where women have trail-blazed,” she told New Zealand broadcaster TVNZ. “I’ve always been conscious of the fact that I’m a role model, and of course I’ve been a very strong advocate of women’s participation in politics.”

Politics has traditionally been a male preserve in the Pacific islands, with Hilda Heine of the Marshall Islands still the only woman to lead an island nation when she was president from 2016 to last year.

“Women’s representation [globally] is the lowest in the Pacific island states as women hold 6 percent of seats, and they are not represented in parliaments in three countries,” UN Women said in an assessment released in January.

However, Mataafa, 64, is perhaps uniquely placed to challenge such gender restrictions. Her father was Samoa’s first prime minister when it gained independence in 1962. After entering parliament in 1985, she became the country’s first female cabinet minister, then deputy prime minister in 2016 until she quit last year when Malielegaoi introduced laws that she believed undermined the constitution….