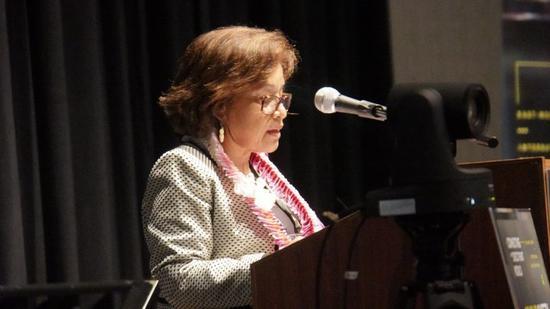 As Pacific leaders meet in Suva to discuss deepening regionalism through the 2050 Strategy for the Blue Pacific Continent, USP, the region’s university continues to suffer the impacts of continued funding constraints.

The Pro Chancellor of the University of the South Pacific says “students are hurting” as the conflict between the Fiji government and USP continues over leadership at, and financing to, the regional university.

Hilda Heine says the “funding constraints and the relationship with Fiji is something that is making it difficult for the university to move forward.”

“I think we have to think about this whole thing in the context of the students and what’s happening to the students because they are hurting,” Heine told Islands Business recently in Hawaii. “They shouldn’t be brought into this argument that the adults are having.”

The USP Council met in May, and stated it heard concerns “on the financial and operating risks arising out of Fiji’s withheld grant compounded by the COVID-19 economic impacts.”

It further stated: “Apart from the continued dialogue attempts with the Government of Fiji, the Council was looking at other measures to deliver its core business without compromising the quality of learning and teaching, research and student support. The Council commended the Vice-Chancellor and President and the Senior Management Team for the prudent financial measures undertaken to date despite the uncertain economic outlook and Fiji’s withheld grant.”

Islands Business understands that the Fiji government has still not met with USP leaders. There are no indications that a grant will be released to USP when the Fiji national budget is handed down this coming Friday.

Fiji’s Attorney-General and Minister for Economy, Aiyaz Sayed-Khaiyum has consistently said the Fiji government wants an independent investigation into USP’s Vice Chancellor, Professor Pal Ahluwalia, who it deported in February 2021.

“Fiji does not accept Ahluwalia as the vice-chancellor and will not provide any funding to USP for as long as he remains the supposed vice-chancellor,” he has told Parliament.

A student’s view, and a way forward?

Dale Pana is a Solomon Islander studying education at the University. He started studying at the Laucala campus in 2019, and can see the impact of the conflict and financial difficulties, particularly when he was staying on campus.

“Compared to 2019, the halls they’re a bit run down. In some cases the room fans are not being installed, requests were given. Also in some places, fridges, microwaves, even the sinks outside…and also some of the activities. The social nights, cultural events, we used to have it….when we ask the reps they say ‘no money’, ‘USP doesn’t have money’.”

Pro Chancellor Heine says USP has been talking to other donors to see if they can increase scholarships and funding to the institution, and diversify the sources of that funding. “The whole structure of how the countries are supporting the university, that needs to be revisited or looked at. What else can be done so the university is not subject to political whims of leaders.”

She says as one example, Federated States of Micronesia, Palau and American Samoa might be encouraged to join the USP, to widen the student base, and access U.S-funded scholarships.

“The Northern countries are really not so close to these institutions, and the Marshall Islands were really one of the first to explore that. I think it is a good partnership that offers an opportunity for our students to come to a regional university that is in the centre of the Pacific, and is able to communicate and get students from different cultures of the Pacific to interact with each other and strengthen that relationship.”

Pana believes the university needs to survive what he calls the “tug of war” for the sake of regionalism.

“They should consider the students’ rights and priorities.

“When they [students] come here, as the saying goes, [it’s] ‘One people, one ocean’. It’s only in USP, people like me, I got the chance to interact. So when you minimise, when you don’t do such activities, it widens the gap.”

He asks the leaders this week to “come to terms to address this issue because it has been some time now, and USP is one of the places where all the regional students come, so if they can do away with their differences and just settle it once and for all for the betterment of everybody, especially for the future.”

The USP Vice Chancellor’s office says it will issue a statement after this week’s meetings.

USP officially welcomes Professor Pal Ahluwalia back as its Vice-Chancellor