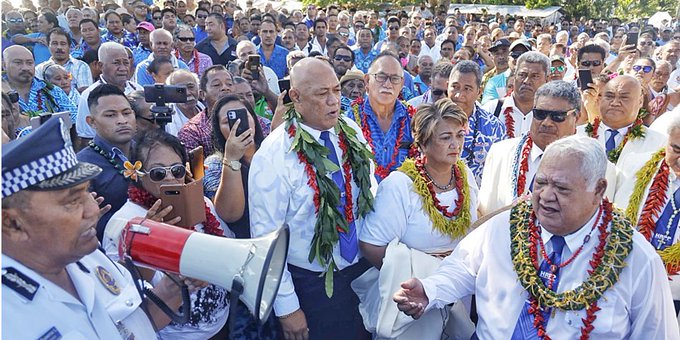 Samoa Speaker of Parliament, Papali’i Li’o Ta’eu Masipa’u has rejected Human Rights Political Party’s(HRPP) latest repeated request to be sworn in by the Head of State.

The Speakers letter dated Monday, 13 September was in response to the HRPP Leader’s letter of 07 September and a subsequent meeting with the HRPP leader and Party Secretary that again asked for their members to be sworn in by the Head of State.

On 07 September, the Speaker wrote to HRPP Leader that “The swearing in of your good self and members of the Human Rights Protection Party is to be done by the Speaker in accordance with Part 111 (14) (1) (2) Standing Orders of the Parliament of Samoa 2021.”

The Speaker also referred to Part 111 (14) (1) (2) of the Standing Orders for each member to take the Oath of Allegiance.

“The Oath shall be administered before the Assembly by the Speaker to each member, who shall subscribe the same at the first appropriate opportunity after the members’ election to the Assembly. No Member of Parliament shall sit or vote therein….until that Member has taken and subscribed the Oath of Allegiance.”

In his letter on Monday, Speaker Papali’i Li’o Ta’eu Masipa’u referred to the HRPP’s numerous broadcasts where they continued to oppose and refuse to accept the current FAST led government who were sworn in 24 May 2021.

“Your unceasing refusal to accept the swearing in which occurred on the mentioned date also means that you do not accept my position as Speaker.

“Because of these reasons, a swearing in of the Members of the Human Rights Protection Party will not take place at the Parliament sitting on Tuesday 14 September 2021.

“Since there will not be a swearing in on Tuesday, your members who have not been sworn in will not be allowed to attend the sitting.

“This decision is made in accordance with the Standing Orders of Parliament and the Constitution of the Independent State of Samoa 1960, as well as to maintain the honor of Parliamentary processes and procedures,” wrote the Speaker.

HRPP leader, Tuilaepa Sailele Malielegaoi in a live broadcast Monday, refused to accept the Speakers decision and said that they will attend the Parliament sitting.

“Our constituencies of over a hundred thousand people will escort us there,” he stated.

Other than refusing to allow HRPP Members into Parliament, the Speaker has also announced that the parliament grounds and premise will be secured and will not be open to the public today. This is with the exception of CEOs, media and some officials required for the parliament session.

Several HRPP members came to Parliament Monday before the start of the pre-sitting session where the Electoral Commissioner briefed the members on proposed amendments to the Electoral Act that will be tabled in today’s session.

Of the HRPP’s 25 members,seven lost their seats in the election petitions and will go back for by elections.

Meanwhile, the future of the HRPP members who have yet to be sworn in remain unclear.

The Speaker has stated his position that the law is silent on Members who have yet to be sworn in beyond the 45 days allowed under the Constitution. This is the first time such as happened in Samoa’s 59 years of independence and was due mainly to the four months long drawn out constitutional impasse due to the HRPP Leaders refusal to give up power.

There is also the option of seeking a court declaration whether the unsworn members can be sworn in outside the 45 days stipulated by the Constitution or they have to go back to the polls to see if these members still have the confidence of their constituents.

In another development, a procession of Human Rights Protection Party (HRPP) supporters led by the party leader Tuilaepa Sa’ilele Malielegaoi and other elected Members were stopped by Police Tuesday some 200 metres from Samoa’s Parliament.

A police officer, who was part of the police cordon on the main road not far from the Legislative Assembly, told the former Prime Minister and HRPP Members as well as their supporters that they were only doing their job to uphold the peace.

Speaking through a megaphone, the police officer told the crowd that the Speaker had already advised them of his position on their swearing-in as elected Members and they must do their part.

Tuilaepa, in response to the police officer, told the crowd that the country’s current political crisis is something that never happened during his Government and the Fa’atuatua i le Atua Samoa ua Tasi (FAST) Government is acting dictatorial on how it is addressing the issue.

He then made reference to his correspondence with the Speaker on the swearing of his party members and questioned what else did the new Government want as his party and their members have recognised the new administration.

Referring to the first sitting of the XVII Legislative Assembly on Tuesday morning, the HRPP leader said they needed to get into the Parliament in order for them to be sworn-in and appealed to Police who blocked the road to led them through.

“What a sad day for Samoa,” said Tuilaepa who described the move by the Police as akin to “Hitler”.

A police officer later told the crowd that they take on the grievances expressed by the former Prime Minister and they will relay it to the authorities, before urging the supporters and the elected unsworn Members to return to the party’s Petesa headquarters.

Tuilaepa and his unsworn Members all wore white suits and could be easily distinguished from the crowd of their supporters as they led the march to the Parliament, before they were stopped not far from the House.

The constituencies of Lepa and Sagaga No. 1 led the procession of supporters from town to the party’s headquarters in Petesa. But this went against the notice issued by the Speaker of the House, Papalii Lio Masipau which bans members of the public and uninvited guests from going to Mulinu’u after threats were made, which compelled the Police to lockdown parts of the Mulinu’u peninsula restricting public access to the area.

The Police also released a statement Monday pointing restrictions to the area following the statement issued by the Speaker’s Office.

The restricted areas include the Tofilau Eti Alesana building, the Parliament House, the lawn in front of parliament and any other buildings, enclosures or open spaces that are considered a compound of the Legislative Assembly.

Amidst the commotion on the main road in Mulinu’u not far from the Parliament, the Legislative Assembly has got its first sitting of the XVII parliamentary term underway.