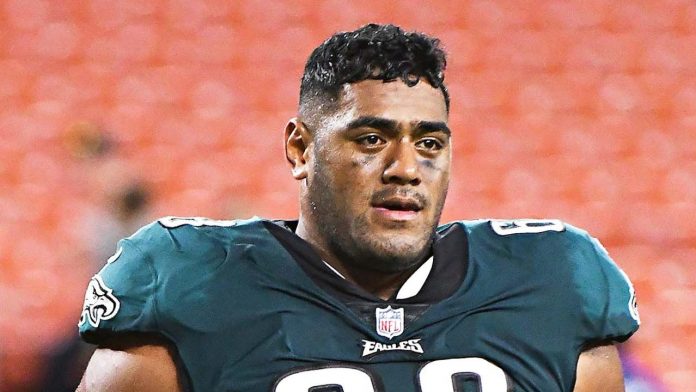 Rugby league reject Jordan Mailata has set his family up for life after signing a four-year NZD$94 million (US$60 million) extension with the Philadelphia Eagles.

Five years ago Mailata was playing junior rugby league for the South Sydney Rabbitohs. But at 6-foot-8 and 142kg he was told he wasn’t fit enough to make the NRL, prompting his agent to contact NFL teams.

The 24-year-old was drafted in 2018 as part of the NFL’s international player programme, working his way up to become the team’s starting left tackle this year.

He spoke about the contract extension for the first time after today’s season-opening 32-6 win over the Atlanta Falcons, saying a big chunk of the money will go to his parents who were born in Samoa.

“Been wanting to buy my parents a house, so I can finally do that,” Mailata told reporters.

His father, Tupai, initially moved the family from Samoa to New Zealand with a plan to settle but unexpectedly ended up in Australia.

“There’s a family story behind that,’” said Mailata’s oldest brother Moana, who was born in New Zealand, when interviewed by the Philadelphia Inquirer in 2018.

“My cousin ran away from New Zealand. My dad’s sister said, ‘Go find her.’ My dad, a handyman, right? He should have private investigator [listed] as well. He found her.

“She stayed in Australia. He liked Australia so much he stayed too, sending for his own family. So Jordan and his younger brother, Millo, are the Aussies.

Mailata’s position of left tackle is considered the most important in the offensive line. His job is to protect Eagles quarterback Jalen Hurts who starred in the win over Atlanta – completing 27 of 35 pass attempts for 264 yards and three touchdowns.

“I think it is a movie,” Mailata said.

“I’m just waiting for someone to say cut, then all the lights come down.

“Obviously, it’s an incredible feat. I’m extremely blessed to have gotten that extension.

“Everyone (at home) called me ‘Big Money’. I told them not to call me that. I’m trying to take it day by day … keep getting better, one per cent better every day. I strongly believe in that,”  he said.