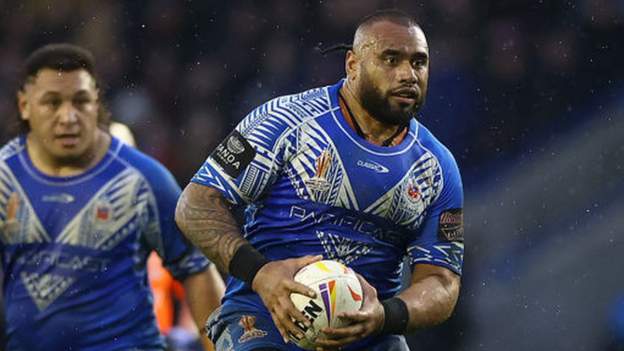 Toa Samoa captain Junior Paulo is set to miss the Pacific nation’s historic World Cup semi-final against England at Arsenal’s Emirates Stadium after being hit with a one-match ban for striking.

Paulo was placed on report for raising his forearm as he ran into Tongan forward David Fifita late in Sunday’s 20-18 quarter-final win at Warrington was charged with Grade A Striking.

The Eels prop has until 11am, Tuesday (UK time) to appeal against the one-match suspension.

Samoa fullback Joseph Sua’ali’i has received a caution for raising his knee in a tackle.

Brazil captain and halfback Maria Graf has lost her challenge against a one-match ban for tripping in the Amazonas opening World Cup loss to England on Tuesday.

Graf, a rugby union referee and judo champion, was charged with Grade A intentional tripping and will miss Brazil’s second match against Papua New Guinea after being found guilty at an independent judiciary tribunal hearing.

Orchids forward Michelle Ikupu received a caution for contrary behaviour in the PNG team’s 34-12 defeat of Canada, as did Cook Islands lock Anekka Stephens for dangerous contact in the Moanas’ loss to Australia

Sydney Roosters prop Jared Waerea-Hargreaves is set to miss New Zealand’s quarter-final clash with Fiji after being charged over a high tackle in last weekend’s match against Ireland.

Waerea-Hargreaves, who was sinbinned for the incident, faces a one-match suspension for a Grade A high tackle.

Lebanon forward Jaxson Rahme has been cleared to play against Australia in the quarter-final at Huddersfield after receiving a caution for dangerous contact in the Cedars win against Jamaica.

Scotland forward James Bell has been hit with a one-match ban for Grade A dangerous contact in the Bravehearts’ loss to the Bati.

Both players were sinbinned during the match, won 32-16 by the Kumuls.

Yei, who plays for the Central Queensland Capras, has been charged with a Grade A careless high tackle and will miss PNG’s clash with Wales in Doncaster.

Rennie, who plays for the Newtown Jets, has also been hit with a one-match ban and is set to miss this weekend’s must win clash with Tonga at Middlesbrough after being booked for a dangerous throw.

Ireland prop Jaimin Jolliffe will miss the game against New Zealand after unsuccessfully contesting his ban for a high tackle, while teammate Liam Byrne and Fiji’s Tui Kamikamica will also miss the final round of World Cup pool matches.

With Byrne suspended for two matches on separate dangerous contact charges, the Wolfhounds challenged Jolliffe’s ban in a desperate bid to have him available for the must-win match against the Kiwis in Leeds.

Fiji team-mate Taniela Sadrugu, who plays for the Cowboys, received a caution for dangerous contact.