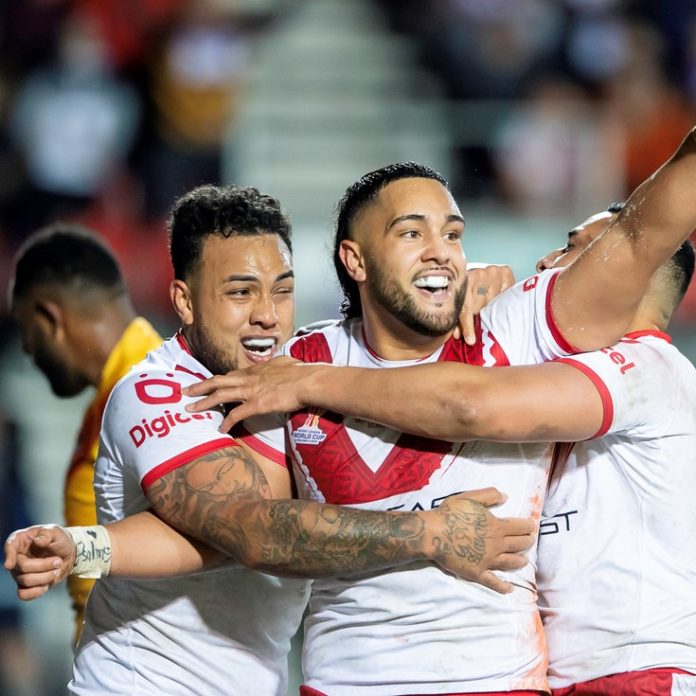 Mate Ma’a Tonga have survived a scare from a committed PNG Kumuls outfit to come away with a 24-18 win at St Helens’ Totally Wicked Stadium.

In the game of the World Cup to date, the Tongans broke an 18-18 deadlock with three minutes to play courtesy of a miracle try to Rabbitohs star Kaeon Koloamatangi on his Test debut.

After trailing 18-6 at the break, the Kumuls showed great courage to fight back and will take plenty of heart from the narrow defeat.

It was clear from the outset that the Kumuls had come to play, opening the scoring through skipper Rhyse Martin in the sixth minute when he powered onto a Kyle Laybutt pass and plunged over.

The Kumuls almost had a second five minutes later when hooker Edwin Ipape tried to burrow over from dummy half but lost the ball just short of the line.

A brilliant kick return by fullback Tolutau Koula led to Tonga’s first try in the 14th minute, the elusive Sea Eagle bamboozling the defence before finding Will Penisini in support.

The Kumuls should have taken the lead in the 27th minute when Justin Olam put Dan Russell over in the corner but replays showed the winger had put his foot into touch before grounding the ball.

Come the 35th minute it was Tonga taking the lead when interchange forward Moeaki Fotuaika finished off some great lead-up work by Tui Lolohea and Koloamatangi to dot down under the sticks.

Dolphins-bound young gun Isaiya Katoa was next to score just 90 seconds later after Moses Suli surged into the back field and found the 18-year-old looming in support to take the score to 18-6 at the break.

The Kumuls hit back immediately after half-time when Ipape left four defenders in his wake and found Lachlan Lam backing up for a sensational PNG try.

A huge call in the 54th minute when the video referee ruled Kumuls winger Rodrick Tai had failed to ground the ball in the corner after watching several replays.

Having entered the game from the bench in the 52nd minute, David Fifita made an impact when he powered his way over the line only to be denied by desperate defence from Lam, who managed to hold him up.

A mistake by Koula at dummy half in the 68th minute gave the Kumuls a golden opportunity to grab their third try and Russell made amends for his earlier bombed try when he took the final pass from Alex Johnston to cross wide out.

Martin calmly landed the conversion to level the scores at 18-18 before Isaiya Katoa had a shot at penalty goal from 40m out to put Tonga back in front but came up well short.

With the game seemingly headed for a draw, Tonga came up with a freakish try in the 78th minute, finished off by Koloamatangi from a Taukeiaho grubber after eight different players had handled the ball. Isaiya Katoa’s conversion made it 24-18.

“It was a bit of a blur. I think it was last tackle and the boys were just throwing the ball around and I was trying to the follow the ball in case something happened. Siua put a good kick in, it was perfect, and I was just lucky to be there. I always dreamt of playing for Tonga and to score a try at my first World Cup, in my first game, I’m very humbled by it,” said Tongan forward Kaeon Koloamatangi on his match-winning try

“I’m just so glad that my boys played the best that they can tonight. We knew it was going to be tough and we kept turning up for each other and I thought we dug deep tonight. I want to say thanks to all the fans and all the family watching back home and thank you to all the fans who turned out here. I’m just so grateful that I have the opportunity to represent my country on this big stage,” said PNG Kumuls hooker and player of the match Edwin Ipape

The next assignment for Mate Ma’a Tonga is against Wales at Totally Wicked Stadium in St Helens on 25 October while the Kumuls face Cook Islands the following day in Warrington.