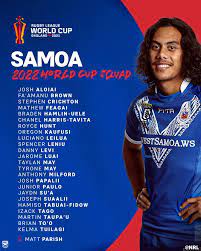 Samoa have named their line-ups for the Rugby League World Cup.

The team are packed with NRL stars, including some considered the best in the sport, and who have turned down lucrative offers by Australia and New Zealand.

“They will cop the money to play Origin, but they don’t want to play for Australia”, he added.

Toa Samoa are based in Doncaster and will play hosts England in the opener of the World Cup. Many are expecting a Samoan upset.

“We could be hosting the winners, it’s an unbelievable side they are putting together”, Doncaster Rugby League CEO Carl Hall told the Doncaster Free Press last week.

“It wouldn’t be a surprise to see them win that.””

Hall’s comments are not an overstatement. Eight players named in Toa Samoa, played in the NRL Grand finals most of whom were first-choice selections for the Kangaroos including Penrith Panthers Brian To’o and Parramatta Eels Prop Junior Paulo.