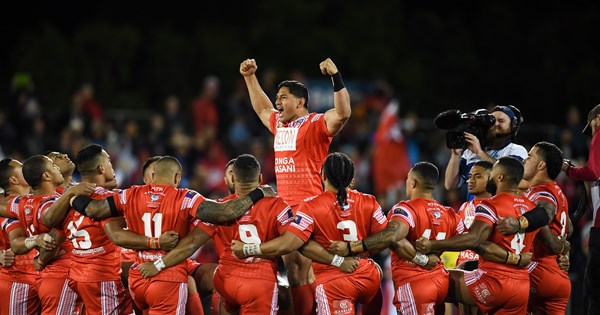 Pacific nations are set to kick start their World Cup campaigns in June when they take the field in the first Tests played in the Southern Hemisphere since 2019.

The Tests will take place during the NRL’s stand-alone representative round, which features the women’s State of Origin in Canberra on 24 June and Game II of the men’s series between NSW and Queensland in Perth on 26 June.

Besides providing an important opportunity for the six nations to prepare for the end-of-season World Cup in England, the Tests will also have a significant bearing on player eligibility for the tournament.

While the likes of Junior Paulo, Jarome Luia and Xavier Coates will be able to play Origin and still represent their Pacific heritage at the World Cup, players are no longer able to swap between nations in the same year.

The new rule will prevent 11th hour defections, like that of Jason Taumololo, Andrew Fifita, David Fusitu’a and Siosiua Taukeiaho from New Zealand and Australia to Tonga at the 2017 World Cup.

It will mean that the likes of Sharks winger Ronaldo Mulitalo would be unable to play for New Zealand in the mid-season Test and then choose represent Samoa at the World Cup if left out of the Kiwis squad.

However, the likes of Cronulla centre Siosfifa Talakai, Brisbane’s Kotoni Staggs or Penrith’s Stephen Crichton could still represent NSW in the upcoming Origin series and play for Tonga or Samoa at the World Cup.

Similar eligibility rules have been introduced ahead of the women’s and wheelchair World Cups to be played alongside the men’s tournament in England at the end of the year.

The Kiwi Ferns will also warm-up for the World Cup with a Test against Tonga in a double-header at Mt Smart Stadium on 25 June.

The Kiwis will enter the World Cup as the No.1 ranked men’s team, while Tonga’s last Test was an historic 16-12 defeat of the Kangaroos at Eden Park in November 2019.

“We are excited about the opportunity to represent the proud nation of Tonga for the first time since the successful campaign against Australia and Great Britain back in 2019,” Tonga coach Kristian Woolf said.

“This opportunity has been a long time coming, so we can’t wait to face the Kiwis again. This will be an important match for us as we look to reunite the team, and also give some of our young players a chance to represent their country ahead of the World Cup.”

ARLC Chairman Peter V’landys said the round would celebrate the re-birth of the international game following the COVID-19 Pandemic.

“The Commission has made it clear that growing international Rugby League would be a priority and we are delivering on that promise. Representative Round will provide a return to the excitement and national pride that Test matches produce,” he said.

“The Pacific Test Matches will be vital for these nations as they prepare for the World Cup later this year and importantly, for our fans, a chance to watch their heroes live in their national colours. The passion of the Pacific Nations and their fans is something unique to rugby league.

“This is part of a long term plan to grow the international game in conjunction with International Rugby League and member countries. We’ve seen with the growth and success of Tonga in recent years and we want to capitalise on the potential depth of our Test playing nations.”

“To have State of Origin and Test Matches across one round for the final time before we enter a new cycle from 2023 of a dedicated international window in October is exciting for the game.’’ he said.

“I’d like to thank Clubs, the IRL, RLPA and the various international bodies for working together to make the round a reality.”

International Rugby League Chairman Troy Grant said the matches would be important fixtures ahead of the World Cup later in 2022.