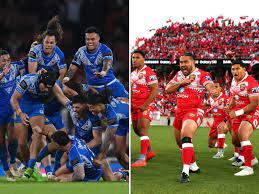 Despite reaching the final of the World Cup, Samoa will remain a tier two nation — and International Rugby League chairman Troy Grant says that won’t change “any time soon.”

Samoa’s historical win over England to reach the final sparked a debate over the international tier system, just like Tonga’s upset win over Australia in 2019.

But Grant has confirmed to News Corp that the two nations will likely remain on a tier two status for the next 10 years.

“I don’t think that (Samoa and Tonga being promoted) will change any time soon,” Grant said.

That means there will be no pressure on the NRL to tweak State of Origin eligibility rules.

Under the current rules, a player cannot play for New South Wales or Queensland if they choose to represent a tier one nation in international footy.

If Samoa and Tonga were to be promoted to tier one status, the likes of Brian To’o and Junior Paulo would have to choose between representing NSW or Samoa.

Grant believes the tier one and tier two system “works” and is “great for Origin football” because it allows players to be more involved in international footy.

“Currently, Pacific guys such as Tino Fa’asuamaleaui (Queensland and Australia forward who has Samoan heritage) can go back and forth between nations,” he said.

“If Tino wasn’t selected for Australia by Mal Meninga (Kangaroos coach), he could still play for Samoa because they are a tier-two nation.”

As previously detailed by foxsports.com.au, a lot more goes into a promotion to tier one status besides on-field results.

Nations are expected to meet a number of requirements including participation numbers, domestic senior competitions, junior development and access to recourses to be ruled a tier one nation.
Grant knows there’s a “lack of understanding” around the system so confirmed to News Corp that “eligibility and tiering will be on the agenda” of a December board meeting.

“Tiering about nations is not just about on-field performance,” he said.

“Whilst Samoa and Tonga’s on-field national teams are performing to a level of excellence, they have some work to do on the domestic front.

“It’s those performances that will hopefully drive the standards in their nations back at home and we’ll see where that takes us.

“The aspiration of Samoa and Tonga (to be tier-one nations) is terrific and we will do everything we can to support them because that’s our job, but we don’t want to set them up to fail either.

“You want to make a tier-one elevation based on a really strong framework so as countries their performances can be sustainable on and off the field,” he said.