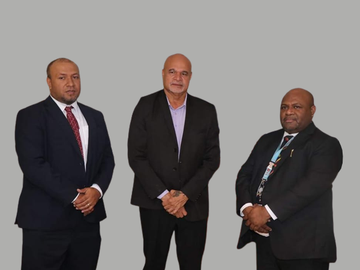 Solomon Islands nationals and nationals of other Melanesian Spearhead Group (MSG) countries can now get their visa on arrival when traveling to Papua New Guinea (PNG).

This came after the PNG government formally declared the re-activation of Visa on Arrival (VOA) procedure.

The announcement on Tuesday in Port Moresby was made by PNG’s Deputy Prime Minister & Acting Minister for Labour and Immigration, John Rosso and Chief Immigration Officer, Stanis Hulahau.

Solomon Islands High Commissioner to PNG, William Soaki, who witnessed the VOA reactivation event confirmed this in a statement.

The re-activation of VOA means the nationals of MSG member countries, including Solomon Islands, Vanuatu, Fiji and New Caledonia can get a visa when traveling to PNG upon arrival at the Jackson’s International Airport in Port Moresby.

MSG Associate member, Indonesia and Observer, Timor Leste are not covered by the VOA.

“As of Tuesday 22 November 2022, MSG member nationals can once again benefit from the service of visa on arrival when travelling to Papua New Guinea,” High Commissioner Soaki said.

“On behalf of the Solomon Island Government, I acknowledge the PNG government for this timely gesture.

“I take this opportunity to thank the PNG government through PNGICA for the reactivation of VOA,” High Commissioner Soaki said.

“I also assured them that through airline operators, we will ensure that Solomon Islands nationals adhere to PNG laws and regulations and produce vaccination cards before travelling,” High Commissioner Soaki said in a statement.

In the past Solomon Islanders wishing to travel to PNG must apply for VISA in Honiara before traveling.

However, the recent incident last month, involving three Solomon Islands medical doctors is believed to have forced the PNG government to relax its VISA requirement for MSG member states.

The three medical doctors traveled to Port Moresby to do a compulsory pre-exam intensive course and final examinations for the training programme at the University of PNG.

They encountered problems on their arrival at the Jackson’s International Airport as they were issued with hand written visas by the PNG High Commission in Honiara due to printing problems at the chancery.

The problem was further complicated after no records of the visas were found in the PNG immigration system and the doctors were just about to be deported when Professor Glen Mola made a facebook post about the matter, prompting a public call for the PNG Government’s granting of visa on arrival for MSG state nationals travelling to PNG.

As a result, PNG immigration officials, including Prime Minister, James Marape, were aware of the situation and intervened to sort out the problem.

Solomon Islanders traveling to Fiji and Vanuatu also receive visa on arrival in these two MSG countries under the MSG agreement.