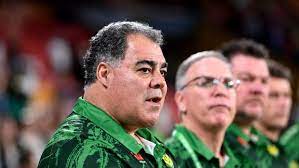 -Mal Meninga wants every NRL player to pledge their allegiance to a specific country when they sign their first NRL contract as he escalates his push to scrap the tier system and put Pasifika powerhouses such as Tonga and Samoa on a level footing with Australia.

The Kangaroos coach, who will lead the World Cup holders in their first Test match for more than three years against Fiji on October 15, has voiced his support for smaller nations not to have a pay discrepancy compared to the established powerhouses.

Meninga said he was happy for the likes of Joseph Suaalii, Junior Paulo, Brian To’o, Jarome Luai and Josh Papali’i to represent Samoa in the World Cup, saying it will make them better players.

Samoa will start their World Cup campaign against England and are favoured to qualify from their side of the draw for a decider against potentially the Kangaroos or New Zealand, who are on a collision course in the semi-finals.

In an interview just hours before the Kangaroos flew out for the United Kingdom, Meninga speaks to Adam Pengilly(AP) about the eligibility ruckus and why he might rest the grand final stars such as Nathan Cleary and Isaah Yeo from Australia’s first game against Fiji.

AP: Are you excited about the depth of this year’s tournament?

MM: I am. We fought really hard for eligibility and most teams now have had really good preparations. To be honest with you, there are no excuses for failure. With a really good prep and everyone understanding who they’re playing for, coaching staff will have a better preparation with their footy teams … who knows [what could happen].

AP: There were always going to be a number of players eligible for Australia who would choose to play for their heritage nations, but were you surprised how many opted to play for the Pasifika countries?

MM: I think it’s important. That’s why Origin is so big, why club footy is so big, it’s all built around that tribalism and passion to play for that jersey. I’m all for those players playing for their Pasifika nations. You know you’re going to get a better player for it.

AP: When a Joseph Suaalii or Junior Paulo rings up to tell you of their decision, what do you say to them?

MM: There’s nothing to say. I’m happy for them, honestly. They’ve made a decision first and foremost and they want to play for a nation they’re passionate about. That makes for a good international series. Players are putting their jersey on for all the right reasons.

AP: Do you think the eligibility rules should stay as they are now?

MM: I think we need to discuss it. There’s got to be a base structure around where you’re born and also an attempt to take the tiers out. In my opinion, we should start from there and see what happens. If you make a choice, you make a choice. When you sign your first contract you make a decision about who you want to play for and there’s no tier [one and two nations]. The other important part is around equity and how much you do get paid. It should be done fairly.

AP: So you suggest when a player signs their first NRL contract they’re locked in to their country of choice for their career?

MM: Equity in payments will help that decision. There will be no reason to go to play for a bigger nation for money. It’s all about passion and who you want to play for. Making those decisions for the right reasons and when it comes from the heart, that’s a good thing.

AP: When you look at this squad you’ve got, what’s your immediate reaction?

MM: I’m excited. You get judged by the players you leave out and these guys deserve to be here. They’ve had a tremendous year and we’ve got an exciting group of men with 13 debutants who haven’t been on long tours before. I’m really excited about going over there and having these guys experience English rugby league conditions. They might love it over there. To play in front of those crowds and their stadiums, I hope they come back as advocates for the international game and want to continue putting the green and gold jersey on because of it.

AP: There’s so much talk about the halfback race between Daly Cherry-Evans and Nathan Cleary. How excited are you to have a genuine competition for that jersey because Australia hasn’t had one for a while?

MM: That goes for a lot of positions. Teddy is captain and is the premier player in our game and deserves to be there, but when you go on tours and I’ve been doing it for a long time [it can change]. I remember going in 1982 when Steve Mortimer and Wally Lewis were the incumbents and Brett Kenny and Peter Sterling won out. That’s what it needs to be like. We’ve got to have that competitive internal pressure and you get picked purely on performance.

AP: In your mind, do you know who is the starting halfback for the game against Fiji?

MM: There’s no winning the first [halfback] jumper, it’s about giving everyone equal opportunity to produce what they can to get into the back end of the series. The first 17 is not going to be an indication what the final 17 might be.
Loading

AP: So you won’t necessarily play your strongest team in the first game with the grand final players still adjusting to the squad?

AP: Are you disappointed you’re on the same side of the draw as New Zealand and potentially won’t meet them in the final?

MM: That’s just the way it is. We haven’t played a Test match [since 2019] and the way they do the international points, it is what it is. You can’t do much about it. England’s got to play Samoa first up. You just don’t know. You’ve got to beat those teams at some stage