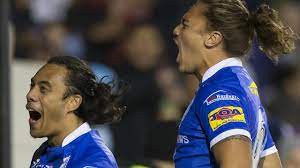 Panthers star Jarome Luai says criticism towards Joseph Suaalii has been “disrespectful” after the teen sensation’s motives were questioned for choosing Samoa over Australia for the World Cup.

Suaalii was a certainty to make the Kangaroos squad but told coach Mal Meninga last week that he wanted to represent Samoa instead.

The Roosters winger said it was “one of the most difficult decisions of my career”, but he wanted to honour his family.

His decision sparked debate around eligibility rules in rugby league, with players able to represent NSW or Queensland in State of Origin and then play for tier two nations like Samoa or Tonga instead of the Kangaroos.

Luai has heard those criticisms before and says it’s disrespectful to attack players for following the rules that allow them to proudly represent the state they grew up in as well as the country that means so much to them and their family.

“All he did was come out and speak his mind and gave reasons why he wanted to play for Samoa.

“People then came out and threw up other things about why he made that decision.

“It’s not about the money. It’s about wearing your heart on your sleeve and doing your last name proud. I’m sure everyone in that Toa Samoa squad is keen to do that.

“I just think it’s pretty crazy and disrespectful to him and his family and the hardships they had to go through to get Joey to where he is today.

“I think the biggest lesson out of all this is that people need to respect other people’s cultures.”

Samoa has come a long way from the team that didn’t win a pool game at the 2017 World Cup and was eventually belted 46-0 by the Kangaroos in the quarter-final.

There are six Panthers in a formidable squad that looms as a genuine threat to take out the title given their potency out wide and big men in the middle.

It’s why Luai is so excited to see guys like Suaalii put their hand up to play five years after his own World Cup debut before he’d played an NRL game.

“I’m grateful to be selected in the squad along with my brothers here at Penrith,” he said ahead of Sunday’s grand final against Parramatta.

“I can’t wait, but obviously we have a job to do here this weekend. God willing, we get through it injury free and then we can make our mark at the World Cup.

“It’s pretty cool to see all these guys put their hands up to play.

“We know within the group that this is a massive opportunity for us. If we’re able to come together and find a game plan that works for us all, then we can play some great footy and we definitely have a chance to win it,” he said.