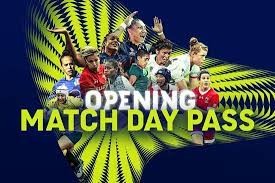 Rugby World Cup 2021 fever is sweeping New Zealand with over 30,000 tickets already snapped up for the opening day at Eden Park on 8 October and sales on track to set a new attendance record for a women’s Rugby World Cup match day.

A week out from the start of the tournament, organisers are now setting their sights on filling Eden Park for the first time in history for women’s sport and setting the bar for the largest ever attendance at a standalone women’s sports match day in New Zealand. Records show the largest attendance to date in New Zealand was 16,162 for the 2008 FIFA U-17 Women’s World Cup final between North Korea v USA at North Harbour Stadium.

Rugby World Cup 2021 Tournament Director, Michelle Hooper said, “We came out just over a year ago with a bold ambition to set a new world record for attendance at a women’s Rugby World Cup match on opening match day at Eden Park. We put our faith in Kiwis to get behind this kaupapa and show up for the stars of the women’s game competing here on the world-stage.

“To have already surpassed that record with one week still to go is an incredible testament to our people and their support for this vision, and also the very special manaakitanga within our sporting community here in Aotearoa. We’re breaking new ground with this tournament and now want to see if we can secure another record first for New Zealand and for women’s rugby by filling Eden Park. We believe it is possible and are over-turning every rock in the process to bring this vision to life. A moment all New Zealanders can be proud of.”

A stellar opening match day at Eden Park will also see Rita Ora delight fans when she takes to the stage at the conclusion of match two (Fiji v England), and at halftime of the final match of the day when Australia face the Black Ferns at 19:15NZT.

World Rugby CEO Alan Gilpin today said, “The wait is nearly over, the teams have arrived, and New Zealand is ready to get the party started – rugby’s great family reunion. With tickets selling fast and the opening match day at Eden Park set to be a very special and record-breaking experience, fans should secure their place now to avoid disappointment.”

Rugby World Cup 2021 is taking place in New Zealand from 8 October to 12 November, the first time the pinnacle event has been staged in the Southern Hemisphere. It’s the biggest global event in women’s 15s rugby and will be contested by the top 12 teams in the world at three match venues – Eden Park, Waitākere Stadium and Northland Events Centre.