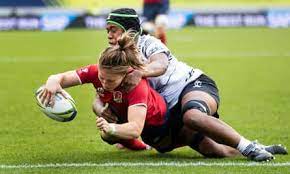 -A tricky first half did not prevent England opening their World Cup campaign with an 84-19 dismantling of Fiji at Auckland’s Eden Park, extending the tournament favourites’ winning streak to 26 matches.

The match was a long time coming for both teams with the finals starting a year late because of coronavirus, plus this being the first meeting between the two sides in the 16 years they have coexisted at international level. Fiji, taking their World Cup bow, were not about to allow the Red Roses to have it all their own way on such a momentous occasion. So it proved in a pulsating opening 40 minutes.

“They rattled us a bit in their physicality and their intent to run the ball in the first half,” said the England captain, Sarah Hunter. “We were a bit more composed in the second half, managed to go back to being England and turned the game around.”

Intent was signalled early by the Fijiana with a strong run from the kick-off by the impressive No 8 Karalaini Naisewa. Such bullocking runs from her and the prop Siteri Rasolea were the fulcrum around which the debutant side’s running and offloading endeavour were built. Two tries in the first half were reward for their efforts.

The full-back Roela Radiniyavuni’s lateral drift across the defence was punctuated by a step and go that put her in open space before finding Alowesi Nakoci on the right that allowed the winger a free run to the line. The outstanding Sesenieli Donu added another after England’s scramble struggled to cope with the Fijiana’s attacking width. This was more impressive given they were down to 14 players after the captain, Sereima Leweniqila, was shown a yellow card for collapsing an advancing England maul close to the line.

Through it all, however, the Red Roses’ ominous physicality and bruising directness was on show, particularly from set-piece and maul, as they ran in four tries to secure a bonus point in the first half and head in at the break 24-14 up. The hooker Amy Cokayne, the lock Abbie Ward and the wing Claudia MacDonald all scored touchdowns that had their origins in England’s trademark lineout drive.

For the 15 minutes while the teams were in the changing rooms, some maybe hoped for a second 40 minutes as relatively competitive and balanced as the first. It was not to be. A focus on the facets at which England excel – power, precision, fitness, game management – facilitated a further 10 tries after the break as Fiji looked increasingly physically and spiritually shattered in the face of the onslaught.

The shift in gear from Simon Middleton’s team was palpable from the opening possession of the second period; Cokayne scoring again from the rear of a maul that marched 10 metres from a lineout to the line.

This set the tone for a second half that was 39 minutes of one-way traffic. Lydia Thompson scored a double and MacDonald added three more tries to her personal stats, one after a diagonal run so long late in the game her calf cramped up.

There was a wonderful moment for Abby Dow, who scored a fend and go on the right with her first touch as a replacement on the wing’s incredible return from a horror leg injury. Zoe Aldcroft, Connie Powell and Leanne Infante then crossed as Fiji were left grasping for both the England players and some defensive dignity.

Fiji rallied, however, with Lavena Cavuru scoring just before the final whistle after her side visited England’s 22 for the first time in a long while.

“I’m so proud of these girls, we were playing a professional outfit and they really got stuck in in the first half,” said the Fiji coach, Senirusi Seruvakula.

England’s Middleton agreed: “First half was a real tough game. I’m really happy that we put in place in the second half what we said we were going to do. One thing this has shown is that there are going to be absolutely no gimmes in this competition.”Earlier on Saturday, France, England’s next opponents, won their opening Pool C match 40-5 over South Africa.