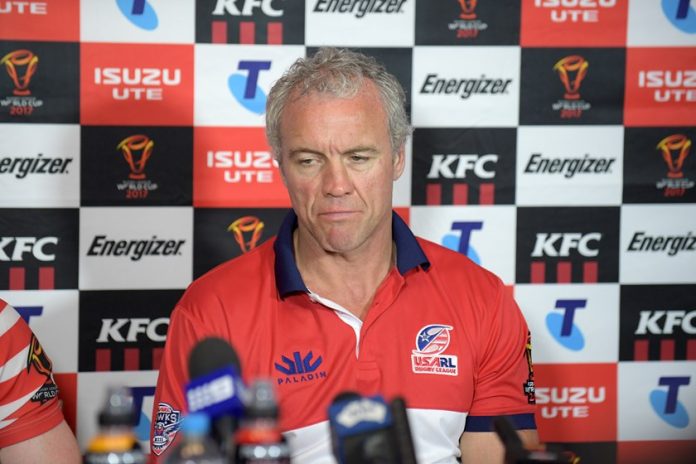 Former Leeds Rhinos and Toronto Wolfpack coach Brian McDermott is set to guide Fiji in next weekend’s opening World Cup match against Australia after answering an SOS call to help the Bati.

Recently appointed Wests Tigers assistant David Furner was Fiji’s coaching director during the mid-season Test against Papua New Guinea but was unable to travel to England and he asked McDermott to fill the breach.

Joe Rabele is the Bati coach, but McDermott was calling the shots from the coach’s box during Friday night’s 50-0 loss to England at Salford’s AJ Bell Stadium and attended the post-match press conference.

“Dave Furner gave me a phone call. Dave is the coaching director, but he couldn’t come over here and he gave me a call to see if I could step in,” said McDermott, who coached the USA at the 2017 World Cup.

“In the few short days that I have been with them, they are fantastic people, really good to be around and they work extremely hard so I am looking forward to the next few weeks.”

Having steered Leeds to four premierships and led the Wolfpack to Super League promotion in 2019, McDermott’s experience will be invaluable to a Fiji team aiming for a fourth consecutive World Cup semi-final appearance.

He was coaching director at Featherstone until recently and worked closely with Rovers coach James Webster, the brother of new Warriors coach Andrew Webster.

James Webster was in the coach’s box alongside McDermott as a Bati side missing NRL grand final stars Viliame Kikau, Api Koroisau and Maika Sivo endured a heavy defeat and worrying injury toll.

Canterbury halfback Brandon Wakeham, Redcliffe Dolphins prop Joseph Ratuvakacereivalu and Mounties second-rower Kaylen Miller failed to finish the match and there are concerns some may be ruled out of the World Cup.
“We incurred a hell of a lot of people coming off the field, some of them injured for the next two or three weeks, I would imagine,” McDermott said.

“In my short time with the players I have realised that they are a very tight group, a very passionate group and are very loyal to each other.

“They are very genuine with it as well, it is not just words on a wall. There is a whole group of people, staff included, who are despondent but if that is how ugly we can be we can work on it.”

Meanwhile, the Kangaroos will have their first training run since arriving in England on Sunday and coach Mal Meninga is expected to rest the four players involved in the NRL grand final, including halfback Nathan Cleary.

Panthers lock Isaah Yeo, second-rower Liam Martin and Eels prop Reagan Campbell-Gillard are others set to watch the October 15 clash against Fiji at Headingly Stadium from the sideline.

Australia play Scotland at Coventry on 22 October and Italy at St Helens on 29 October before entering the sudden-death stage of the tournament.