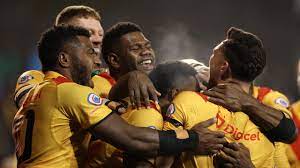 Australian Prime Minister Anthony Albanese has thrown his support behind an NRL team in Papua New Guinea, and floated expansion into the Pacific region as well.

It comes amid suggestions PNG could combine with Tonga, Samoa, the Cook Islands and Fiji to allow a Pasifika team to become the NRL’s 18th.

The Australian PM met with PNG counterpart James Marape, among other leaders, at the Pacific Islands Forum last week.

As the pair made small talk, Marape spoke of his nation’s love for rugby league.

“If there’s something good that Australia has left as far as a lasting imprint in Papua New Guinea, rugby league is one of them,” he said.

Albanese replied: “We have to look at a team eventually in the NRL for PNG, and perhaps from the Pacific as well.”

The super-bid plan is being considered by those behind PNG’s bid for the 18th license, following the expansion to 17 with the addition of the Dolphins.

It’s thought a standalone PNG team would be less likely to succeed.

“The PNG government is very genuine in getting an NRL licence based in PNG, whatever option is being considered.

“The PNG bid will look at every opportunity to bring more content to PNG, that’s the primary goal of our bid. A Pacific team is gathering support and if there’s an opportunity to lead that bid, then we will absolutely consider that as a viable option.

“We’ve seen how engaged our players across the NRL are in representing their Pacific heritage, culture and families. That passion the players have is getting stronger and gathering momentum.

“We’ve seen in Super Rugby recently that they have taken the jump over rugby league and established a Pasifika team. Whilst we think rugby league in the Pacific is far stronger, it gives us the confidence to discuss what a Pacific team might look like.

“Obviously PNG would be leading those discussions, but clearly the genuine goal of the PNG government is to get more content in PNG and a licence based in PNG.”

Rugby union has introduced two teams in the Pacific region, with the Fijian Drua and Moana Pasifika recently finishing their inaugural Super Rugby Pacific seasons. Neither qualified for the playoffs.

A decision is most likely to be made by the Australia Rugby League Commission on whether to admit an 18th side around 2025.

That would be timely for PNG, as they would be celebrating their 50th year since declaring independence from Australia.

Koroisau ‘Would love to represent Australia’