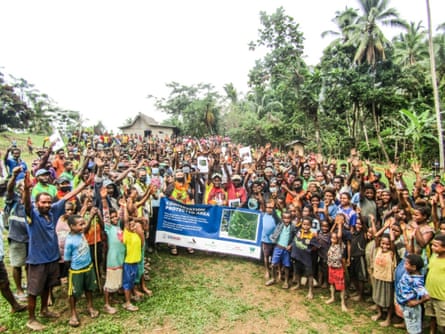 In mid-May, a bulldozer began clearing a logging road into an area of largely untouched rainforest near the village of Suburam, on Papua New Guinea’s north coast, between the mountains of the Adelbert Range and the Bismarck Sea.

Towering kwila trees were among those locals say were felled by loggers. This is a coveted, high-value species that yields the rich red timber familiar in Australia as merbau.

Landowners in the area say these trees are historically never cut down by them. They are considered ancestors, and the local Tivia clan say they only use the hardwood when the trees are “given”, falling naturally. Tivia means “blood”, Lawrance Omben, a clan leader from Arenduk village explains: “Blood because it is red – the tree sap is red.”

They say the bulldozer also levelled a sacred area – a matmat, the burial site for five generations of chiefs from three clans, surrounded by tall kwila that were the daughters of the clan’s mother tree.

“Our belief is that when the masalai [spirits] … touch that sap, [humans] come out from that,” says another Tivia member, Bryan Lavate. “It is the creation of our clan.”

When one of the local chiefs heard what had occurred, he says he lay down in his hut grief-stricken, and stayed there for days.

Others ordered the young men of the clans not to retaliate with violence. Instead, on 19 May Lavate, the secretary of a collective of local clans known as the Yikmol Landowners Association, was dispatched with a letter advising the loggers they had caused damage to the external border of a designated conservation area, that they had no right to be there and should withdraw immediately. And they did.

Sandu Ovot, a chief from Suburam whose great-grandfather was buried in the matmat levelled by the loggers, explains that kwila timber is imbued with spiritual powers, providing medicines and digging sticks for planting garden crops. Logs are only used for building when they are given – when trees or branches fall naturally. They are then also transformed into weapons that hold the strength of ancestors.

Omben, the chief from neighbouring Arenduk village, says that since the letter to the loggers at Suburam in May, the logging crews have moved away.

Meanwhile the Tivia landowners say they have been struggling with the fallout. Because the landscape of their creation story has been desecrated, and the remains of the chiefs of three clans disturbed, it has damaged people’s physical and mental health, says Lavate.

But the Tivia have continued to fight back, seeking justice of some kind, although Lavate says their loss can never be compensated. And so it is that when they hear a reporter from the Guardian is in Madang town, a delegation of 21 men, including seven chiefs, walk hours overnight to catch a ride into town and tell their story.

‘For us, forest is life’

Dubious – in some cases illegal – incursions by loggers into forests across the country are so common as to be unremarkable, according to Peter Bosip, executive director of PNG’s Centre for Environmental Law and Community Rights (Celcor).

“In most cases in PNG there is no such thing as due diligence, so the PNG Forest Authority will just go ahead and accept whatever application that is brought by the loggers.”

He says he hears countless variations of the Tivia clan’s story – far more than his stretched team of advocates can ever take up. As extraordinary as it is, what happened in the forest near Suburam in Sumkar district appears to be an all-too-ordinary reflection of the realities playing out as global corporations push deeper into the world’s third-largest remaining rainforest.

Just three weeks before the bulldozers arrived, Suburam village had been the site of a 20-clan, five-pig feast and extravaganza, as the community celebrated the creation of a conservation area covering nearly 10,000 hectares of forest.

Hundreds of locals were joined by guests representing the partnerships supporting the conservation project – Australia’s Dfat, USAID, the World Conservation Society, PNG’s MiBank and Kamapim, a local sustainable agriculture project that has helped village farmers produce vanilla beans of such quality they are sought out by European chocolatiers.

“The thing about vanilla is that you can grow it, make it, and it’s easy work without cutting your rainforest down, and so we can do conservation, and we can have livelihoods with vanilla,” says Lavate, who represents about 4,000 people across two language groups involved in the project.

For decades, forest communities in PNG have fallen back on selling their trees as one of the only ways to earn income in a country where basic services are scarce and households struggle to cover school fees. It has rendered communities vulnerable to exploitative deals. Loggers are offering 35 kina (about US$10) a cubic metre for prized kwila trees, but often pay less, locals say. These same trees often sell in China for US$500 a cubic metre, according to a 2021 PNG government report.

Rather than sell their trees, Lavate and other landowners are trying to safeguard them for future generations, negotiating fraught clan politics, agreeing terms and mapping boundaries for a patchwork of locally controlled conservation areas.

All this action has unfolded remarkably quickly by PNG timelines – within two years. In a nation notionally still almost entirely held under customary ownership, wrangling over land use can take years with no resolution.

“We’re not rich people,” says Lavate. “We’re not the kind of people who can pay for water, pay for our food, pay for housing. We get these things from our forest. So for us, forest is life.”

‘They feel intimidated, they feel suppressed’

According to mapping done by locals and seen by the Guardian, the logging crew that arrived near Suburam in May carved their road hard along the boundary of the new Yikmol conservation area, despite regulations requiring a 100 metre buffer zone around protected areas, before pushing inside it at least once. Perhaps they were unaware of the new conservation area, or unpersuaded of its authority.

The paperwork formalising the new conservation area could not be lodged with provincial authorities because they were on a protracted strike. Meanwhile, legislation enshrining new protected areas across PNG has been stuck by political inaction for years.

But there are also questions around what rights the Malaysian-owned logging company, Woodbank Pacific Limited, had to be operating in the area at all. The company has not responded to questions, and neither has the PNG Forest Authority.

It appears from log export data that Woodbank’s activities in this region of Madang province rely on colonial era logging concessions called timber rights purchases, or TRPs, that expired decades ago. Created in 1951, these provided a mechanism to purchase timber rights from customary owners and control the harvesting.

The Yikmol landowners delegation is adamant that the company had not been given consent to be working near or within the conservation area or the matmat. “The logging company didn’t ask us landowners,” Lavate says. “We did not have an agreement with the logging company that they could come on our land but they came in anyway.”

In a soon-to-be-published analysis for the ANU Development Policy Centre drawing on 40 years of insight and data, veteran PNG forestry expert Prof Colin Filer observes that outdated TRPs have produced more log exports than any other type of licence for the clearing of PNG forests, and that almost two-thirds of exports in the past three years have come from areas where TRP agreements have expired.

Filer argues these operations are all illegal, citing a 2017 PNG state solicitor’s opinion which came to a similar conclusion.

Celcor’s Peter Bosip argues that if the licences are not valid, then loggers who use them should be held accountable.

But he has concerns about enforceability, speaking generally and not about Woodbank, “Even when there is a court order stopping them … the court is in Port Moresby. The logger in the remote location doesn’t really tend to recognise what the court says, and keeps on cutting down trees, and this has been an ongoing issue here.”

Bosip has broader concerns about the potential for corruption in the industry, saying that government officers, elected officials, from top to bottom, “might accept [a] bribe and say OK, everything is in order and issue the logging permit”, says Bosip. Again speaking generally and not about the logging near Suburam he says that if some loggers have paid police to escort them on site, landowners “might get caught by surprise, and the police go in with arms and threaten them – if you want to dispute the logging company, go to court. They realise they don’t have the money to get legal assistance. They feel intimidated, they feel suppressed, but how can they speak?”

What’s missing, says Paul Barker, executive director of PNG thinktank the Institute of National Affairs, speaking generally, is a commitment to the principle of adherence to law. “There is big money to be made out of this.”

This is shaping as a particularly dangerous moment for PNG’s forests, Barker warns, not least because of the growing global momentum to save the country’s vast, vanishing, wildly diverse landscape as the climate emergency escalates. Speculation around lucrative carbon markets is attracting some genuine players but also unscrupulous “carbon cowboys”. The PNG government declared at Cop26 in Glasgow last November that it would ban log exports in 2025 and end all logging by 2030.

Similarly welcome promises have been made and delayed for 15 years, and while cynics anticipate they may well be pushed out again, loggers are nonetheless “under pressure to extract as many bloody logs as they can over the next two or three years”, says Prof Filer.

“Logging companies are realising they need to move fast just in case some of these carbon agreements, or even biodiversity agreements, actually do get established,” says Barker.P

Not a lone shark: bull sharks may form ‘friendships’ with each...