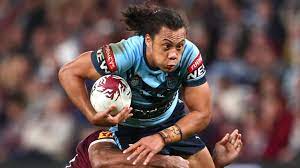 Mal Meninga will reach out to Jarome Luai and make his feelings known about why he should play for Australia – not Samoa – with the livewire five-eighth now “absolutely” on the Kangaroos’ radar.

Meninga did not want to get dragged into a team selection story, especially with so much interest in whether Nathan Cleary had leapfrogged incumbent and future Australian captain Daly Cherry-Evans for the No. 7 jersey.

But the coach said he wants Luai to reconsider his international stance and commit to Australia, especially if he felt passionate enough to represent NSW in Origin.

Under the game’s international eligibility laws, players can play Origin and still commit to a tier-two nation on the world stage, which in Luai’s case is NSW and Samoa. The only players banned from Origin are those who represent tier-one nations, England and New Zealand.

Luai, Brian To’o and now Josh Papalii have all expressed their desire to play for Samoa in the World Cup at the end of the year.

Luai told the Herald last month: “When it comes to international footy you should play for who you feel most drawn to. I was brought up in a Samoan church and household, and I feel close to my Samoan culture. I definitely think we have a lot of talent, and I want to do well for them.”

Pressed on what would he do if Meninga asked him to wear the green and gold, Luai said: “I don’t really know. All I want is for Samoa to do well.”

While Meninga appreciated Papalii wanting to give back to Samoa at the back end of his career, he said it was a different story with Luai who was 24 and only starting out.

Meninga’s long-term fear is what happens to the strength of the Kangaroos, especially if Australian hopefuls miss out on Origin because of players who later commit to the Pacific nations.

“Josh is now 31 and he’s at the back end of his career, and he’s earned the respect and right to choose who he wants to play for,” Meninga told the Herald.

“But Jarome is at the start of his career and I’d like to think he will make himself available for Australia.

“I’ve made it known in the past if a player can play Origin, they should then make themselves available for Australia.

“I’m keen to speak with Jarome and let him know what my feelings and thoughts are about the international game. I’m also keen to hear his thoughts and reasons for wanting to play for Samoa. I can tell you he’s absolutely in the mix for Australia.”

There are huge doubts about the World Cup being staged at the end of the year in England, but should it go ahead, just seven Queenslanders at this stage would make Meninga’s final 23-man cut. If the World Cup is cancelled, Australia would likely play end-of-season Tests against nations like New Zealand and Tonga.

Blues star Cleary has all but leapfrogged Cherry-Evans in the halfback race with Cherry-Evans seen as a viable five-eighth option alongside Munster.

Cherry-Evans is a brilliant ball-runner and one of the most experienced and senior players in the game, but has struggled with the extra responsibility in a struggling Maroons side.

Cherry-Evans, Munster and Cleary, provided the shoulder injury he suffered in game two of the Origin series is OK, are all expected to push deep into the NRL finals with Manly, Melbourne and Penrith respectively.