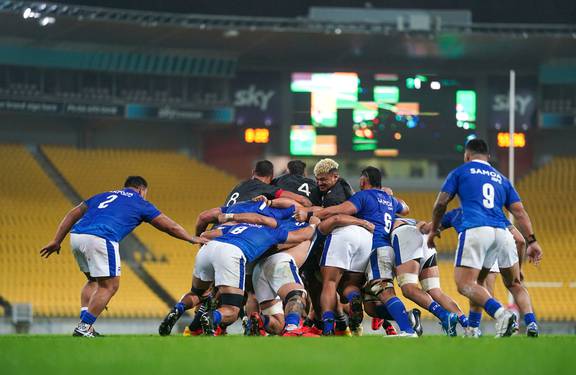 The Māori All Blacks are relishing what is set to be a strong turnout at Mount Smart Stadium for their second match against Manu Samoa, a week after both sides missed out on such a spectacle in Wellington.

The two teams were forced to go about their business on a wet and windy night in the capital last Saturday without any fans to spur them on, thanks to a Covid-19 scare forcing the region to move to alert Level 2.

But this weekend in Auckland, barring an unexpected virus-looking spanner thrown in the works, the Māori and Samoa will be the first on-field act at Mount Smart for a special international doubleheader. Following that, the All Blacks – in their first test match of 2021 – take on Tonga.

A sea of black, red and blue is set to engulf the ground, and assistant coach Chris Gibbes expects a great turnout of supporters for all four teams playing.

“It’s like us with our whānau and our friends – we’re celebrating Māori rugby and we’re expecting quite a few people to come watch us as well. The All Blacks are where it’s at in terms of a drawcard, but there’s a lot to get behind around the other teams as well,” he says.

“Rugby’s one part of Māori rugby, but it’s actually the cultural connection – the whakapapa, the wairua, the stuff that we really value and we’re touching on that every day – it’s all part of what we do and everything we’re about.”

The fans in attendance this weekend in south-east Auckland will be as much a driving force in both side’s performances as the cultural practices and technical improvements they have employed in the lead-up.

Māori halfback Bryn Hall says the outbreak provided the playing group and staff an opportunity to connect better as a group.

“I thought Clayton and our coaching staff did a great job around that. We had a couple of Uber Eats which was obviously great for the boys, they love that. It’s always great being in camp … last year we only got that one week together against Moana Pasifika,” he says.

“We’ve had a lot of continuity the last three or four years with having the same group, so it’s really helped us in congested weeks.”

However, the Māori are not losing sight of the needed rugby-centric preparation following an underwhelming first hit-out. Head coach Clayton McMillan along with captain Ash Dixon were blunt in their assessment of the team in their 35-10 victory, saying they were good in parts, but lacked detail. The team struggled to hold onto the ball early and when they began stringing phases together, their attack often misfired.

Gibbes says they have two clear focuses ahead of this weekend’s clash that connects to the fabric of who they are as a team.

“We left a lot out there so the message this week has been showing our Māori rugby flair, we know that you’ve got to do your due diligence around your pre throughout the week. But we want to go out on the weekend and we want to throw the ball around and show our people what it really is to play Māori rugby,” he says.

“With us, it’s about combinations, playing and time together, there’s a bit of skill factor that goes into that but I think there’s also a couple of clear focuses for us around making sure we get the possession we want on our terms, and we look after it. I know that sounds like a generalisation around rugby but that’s actually what we need to do in order for us to play the style of rugby that we want to play … we’ve got to get the basic stuff done really well.”.