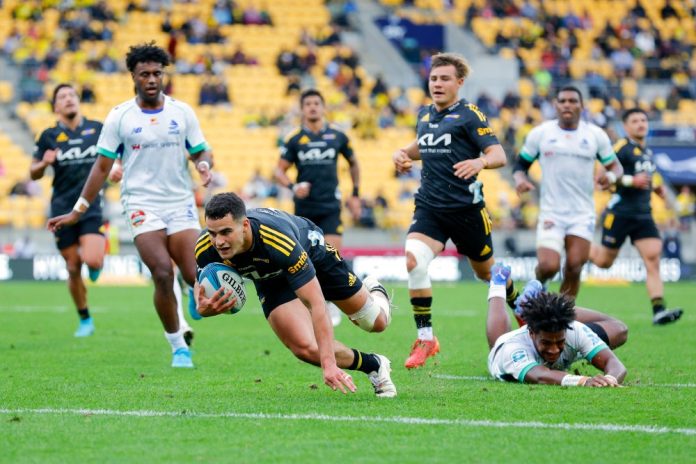 The Hurricanes unveiled a special new talent in 21-year-old No. 8 Tyler Laubscher, who had numerous carries and a key role in several of the Hurricanes’ 11 tries.

The match also saw the Hurricanes’ debut of 108-test All Blacks prop Owen Franks, who played all 150 of his previous Super Rugby matches for the Christchurch-based Crusaders. He took the field in the 46th minute.

The 34-year-old Franks left New Zealand to play for the Northampton Saints in England after missing selection for the 2019 World Cup. He has chosen to make his return at the Hurricanes rather than go back to the Crusaders and confirmed this week an ambition to win back his All Blacks jersey.

“If you’re playing rugby in New Zealand and you’re eligible for the All Blacks and it’s not your goal then maybe you should rethink why you’re playing,” Franks said.

Schoolboy star Riley Higgins, the youngest member of the current Hurricanes squad at 20, made his debut at centre late in the match. He played a part in Moorby’s third try but also received a yellow card after the fulltime siren for a dangerous tackle.

“I think we all know where we want to go and the way we want to play the game,” Hurricanes captain T.J. Perenara said. “I think you saw that from some of our younger guys today with a few boys debuting.

Laubscher “I thought was exceptional, Justin Sangster as well,” Perenera added. “Just our new boys pushing the envelope and making sure their name is in the hat (for selection). It’s what we need in our environment with that competition and just people playing well.”

The Hurricanes’ slow start against strong early defense from the Drua gave no indication of the try avalanche that would follow, carrying the Canes within four points of their highest-ever Super Rugby score.

Moorby finally broke through the Drua defense in the 14th minute and the Hurricanes had a second try four minutes later through hooker Asafo Aumua in which Laubscher played a part.

Moorby had his second and the Hurricanes had scored four tries to lead 26-0 by halftime.

Goosen grabbed a double in the first eight minutes of the second half with Laubscher prominent again in the second. Laubscher also provided the final offload in a try to lock Isaia Walker-Leawere in the 51st minute.

The Fijian Drua had only once ventured into the Hurricanes 22 before the 66th minute when Onisi Ratave scored their only try.

The Hurricanes finished strongly with tries to Salesi Rayasi and Justin Sangster while Moorby completed his hat trick in the 71st minute.