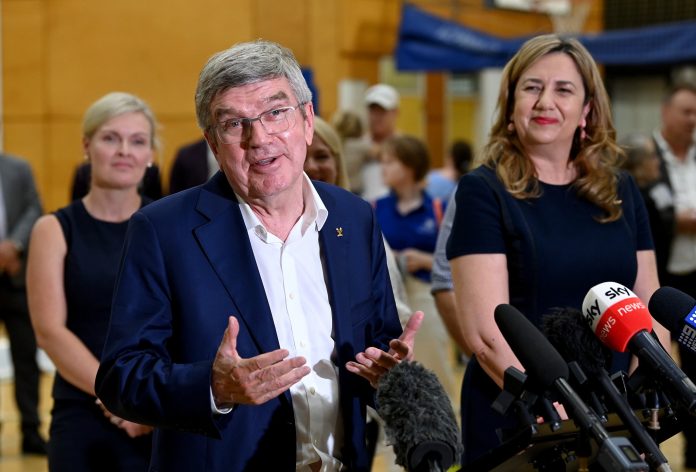 International Olympic Committee (IOC) President Thomas Bach claimed the Brisbane 2032 Olympics and Paralympics will be a Games for the whole Pacific region on a visit to the host city.

The visit continued Bach’s Oceanian tour, following his attendance at the AOC and Oceania National Olympic Committees General Assemblies in Sydney and Fiji, respectively, in the past week.

The IOC President has also visited Tonga and the Cook Islands, with the former having been hit by a deadly volcanic eruption and tsunami in January.

“These Olympic Games will not only be Games in Australia and for Australia, these will be Games for the whole Pacific region,” Bach said.

“You can see the enthusiasm and anticipation is already at a very high level.

“We have met young athletes and sports officials and on everybody’s mind are the Brisbane 2032 Olympic Games.

“We can look forward to this as a great Olympic festival and as a great engagement of the Olympic Games by Australia and the entire Pacific region and Olympic Movements.

“All lights are on green, we only have to wait 10 years.”

Kirsty Coventry, the Brisbane 2032 Coordination Commission chair, said she had been impressed by the strong foundation the organisation already has in the early stages of preparations for the Games.

Coventry highlighted the “strong capacity” in Queensland with its existing sporting facilities and expertise of sporting officials.

Brisbane was confirmed as the 2032 Games host at the IOC Session in Tokyo on 21 July last year.
It was the sole candidate presented to the Session, having already been approved by the IOC Executive Board.

It is the first time that Olympic hosting rights have been awarded under the new system, whereby a traditional bid race has been replaced by the IOC Future Host Commission identifying and proposing hosts to the Executive Board.

Australia has staged the Olympics twice before, in Melbourne in 1956 and Sydney in 2000.

IOC Session begins in Tokyo with a message of peace and...