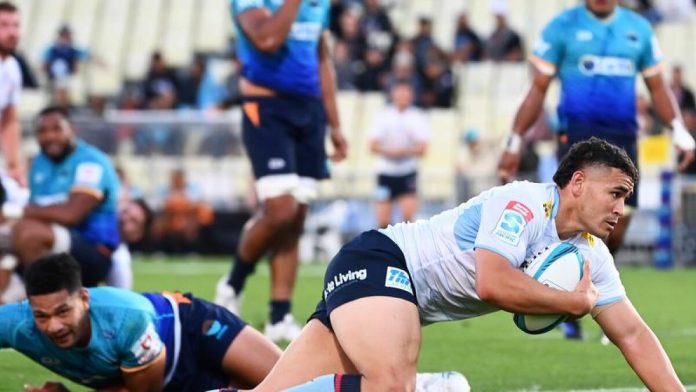 Despite the defeat, there were still joyous celebrations for Moana Pasifika as cancer survivor and former Wallabies playmaker Christian Lealiifano joined rarefied air as only the seventh player to rack up 1000 points in Super Rugby.

But it was the Waratahs who claimed the precious four competition points after a spirited fightback at Mt Smart Stadium.

Almost as quickly as the Tahs raced to a 17-0 in last week’s impressive win over the Crusaders, they trailed 17-0 following two tries in six minutes from Moana.

First prop Abraham Pole crashed over in the 14th minute, then centre Levi Aumua crossed as the competition newcomers threatened a boilover.

The Waratahs kept their cool, though, to strike back through Perese and hooker Dave Porecki to trail 17-14 at the break.

Exciting winger Dylan Pietsch and versatile forward Jed Holloway also enhanced their prospects of a Wallabies call-up as the Waratahs completed the revival in a thrilling second half.

Perese looked to have set up one of the tries of the year for Pietsch straight after the interval, only for the TMO to intervene.

Instead of taking the lead, NSW found themselves further behind after Lealiifano slotted his history-making second penalty goal that nudged the flyhalf past the 1000-point barrier.

But a beautiful long ball from halfback and captain Jake Gordon to winger Mark Nawaqanitawase put the Waratahs ahead for the first time in the 54th minute.

Minutes after pulling off a desperate try-saving tackle on opposite number Tima Fainga’anuku, Pietsch couldn’t be denied a second time when the former sevens ace finished off a fabulous team try that featured 12 players.

Moana had a chance to snatch victory at the death but the NSW try-line defence held firm as the Waratahs posted their first win in New Zealand in seven years.

“I’m pleased we got away with it because I knew it was going to be a hard game,” said Coleman, who feared a let-down from his side after bringing down the mighty Crusaders.

“There was a bit of emotional energy with them and we could have potentially been a bit flat after the high we went through.

“So it’s always a tricky thing but full credit to Moana. We thought we might have got them late in the halves with a bit of fitness but they didn’t stop.

“They kept coming and coming and it went down to that last play on our line.”