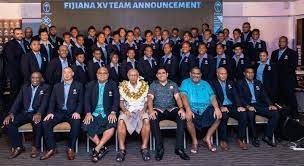 Fijiana 15’s Head Coach Senirusi Seruvakula has selected his 32-member squad for the Rugby World Cup which begins in New Zealand next month.

The squad was announced during the farewell function by Fiji Rugby Chairman Commodore Humphrey Tawake at Holiday Inn last night.

The traveling party consists of 23 local provincial players of which 15 played for the Fijiana Drau and won the Super W Championship, six overseas-based players, and six Fijiana 7s players who were part of the national team which won the bronze medal at the Olympic Games last year and silver medal at the Commonwealth Games.

Seruvakula said “It was so hard to select the best 32 players going to the Rugby World Cup. I had discussions with the other coaches as it was important to understand their thoughts and did a thorough review of all our matches before we made our final selections put the names down for those traveling to New Zealand.”

The two who were not selected due to medical reasons are Jade Coates and Vani Arei.

He added, “Coates will be on standby as she is expected to complete her rehabilitation in two weeks’ time so she will be in New Zealand and in case of any injury then we will bring her into the team.”

Seruvakula said they were blessed to play four test matches this year which set the platform for these girls.

“The big test for us was last week against Wahine Maori and also the two test matches we played earlier in the year against Wallaroos and Japan. It was good to play these matches which gave the players the much-needed exposure and then an idea to us on their level of performance” said Seruvakula.

He added “A lot of girls have stepped up as far as their performance is concerned. These girls have experience playing at the international level, they just need the confidence to play on the world stage.

8 cap veteran, Sereima Leweniqila will captain the side. She is one of the most senior players in the team, who have played in nearly all test matches and qualifiers for the Fijiana 15s since 2016.

“She has been one of the stand-out players and she had played a lot of games for Fijiana and that’s one of the reasons why we have decided her to be the captain and she got the backing of the senior players” said Seruvakula.

The Fijiana 15’s travels to New Zealand on Sunday.