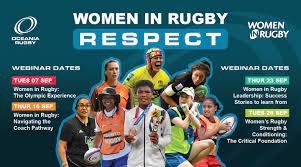 The 2022 Oceania Rugby Women’s Combine will accelerate rugby development for women in the Pacific and pave the way for the region’s brightest rugby talent to join the 2023 Australian Buildcorp Super W competition.

“Really happy that the playing group have come together extremely well, not only are they coming in from different nations but very diverse club environments as well. The coaching staff are enjoying engaging with the group and the education process on position specific roles. We are working with the group and breaking down coachable components of the game.

“In addition to introducing the group to a professional team environment our objective is to educate the players on how they can influence their own team environments with this knowledge”, Gibson added.

“This week is so empowering for our pacific women’s rugby, the group Oceania Rugby have brought here come with so many different stories and experience but being here together is an opportunity we couldn’t dream of and will have such an impact on pacific women’s rugby.

“As a group we are grateful for the Australian Government, Rugby Australia, World Rugby and Oceania Rugby for shining a light into the immense talent pool that we know exists in our Unions but have limited opportunity to show the world.

2The support from both the coaches and girls has been amazing this week, it is one of the best rugby environments I’ve ever been in. Learning and training together to build a better understanding of what we are capable of”, Nightingale added.

Following the incredible success of Fijiana Drua joining Australia’s premier women’s competition 2022, Australian Super W teams will be in attendance across the week to talk to the playing group and coaching staff with the aim of selecting players to join their squads, the addition of players from other Pacific nations in the 2023 season promises to continue to build and broaden the fan-base for women’s rugby in the region.

In addition to on the game play support for the playing group is being provided by World Rugby and Rugby Australia who are leading sessions introducing the group to life in a high-performance setting covering nutrition, player welfare and mindset, rugby laws and performance analysis. A key focus of this high-performance education is to empower the players to share their learnings with their respective teams, by providing the group with tools to take back into their club and national team environments.

Tom Sorsby, High Performance Analyst with World Rugby said: “This week is structure to introduce the players into a professional environment where analysis would regularly be used on both a team and individual level.

The weeklong programme will continue until Saturday.