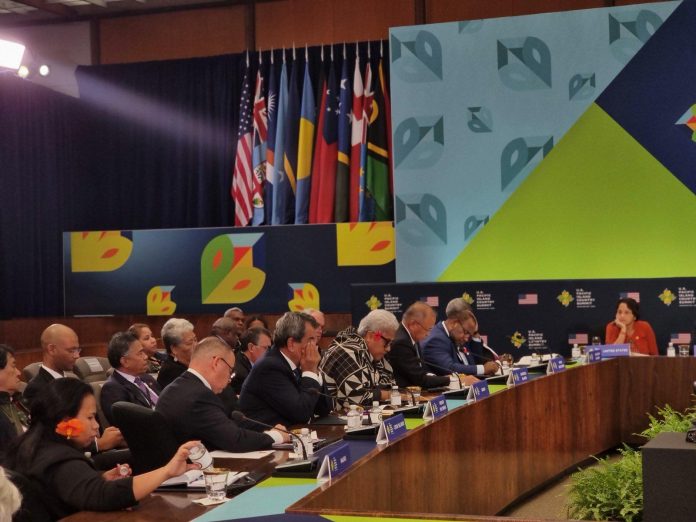 A draft joint declaration being negotiated by the United States and Pacific Island countries condemns Russia’s invasion of Ukraine, flags intensifying American security cooperation with the region and declares climate change is the “highest priority” and “single greatest existential threat” to the Pacific.

However, Pacific nations appear to have stripped away a section which seems to take aim at the contentious security agreement signed by China and Solomon Islands, deleting a reference to the need for Pacific Island states to “consult with one another closely on security decisions with regional impacts”.

Leaders from 12 Pacific Island countries are set to join U.S President Joe Biden and a string of top U.S officials at a high-profile summit in Washington DC over the next two days.

It’s the first time such a large group of Pacific Island leaders have been hosted at the White House, and the U.S is flagging it will make “substantial” new announcements ramping up its regional diplomatic, commercial and development initiatives.

The Biden administration has also flagged it will launch its new Pacific strategy in the coming days to ensure all US government agencies are working together effectively in the region.

The joint statement being negotiated by the U.S and the Pacific for the summit spans a wide range of topics, including climate change, security, illegal fishing, the legacy of nuclear testing and the economic recovery from COVID-19.

Solomon Islands has already flagged it will not join the declaration this week, saying it needs more time to consider the document.

Multiple Pacific Island government sources also stressed negotiations were still ongoing, and the document was likely to change further ahead of the summit.

Some Pacific leaders have compared the US declaration to China’s proposal for a sweeping, detailed trade and security deal with the Pacific, which leaders rejected earlier this year.

The draft version seen by the ABC largely focuses on laying out the principles and broader framework for intensified U.S engagement in the Pacific.

The declaration opens by saying the U.S and Pacific Island countries “recommit to working together in genuine partnership” to tackle “mounting challenges” including a “worsening climate crisis and an increasing complex geopolitical environment.”

The draft also says Pacific leaders welcome the U.S commitment to “expand its diplomatic presence and development cooperation” in the region.

On climate change, the declaration urges all countries and major emitters to ramp up ambition to ensure their planned cuts to emissions align with the goal of limiting warming to 1.5 degrees Celsius.

It reiterates that climate change is the “single greatest existential threat to the livelihoods, security … and wellbeing” of the Pacific and urges developed countries to ramp up climate finance to meet the 100 billion target to help developing countries deal with the impact of climate change.

The section on security has already been edited several times, with one source telling the ABC the negotiations over wording had been long and protracted because the subject was so sensitive.

The draft seen by the ABC condemns “Russia’s brutal war against Ukraine” and calls for Moscow to withdraw, although that section is still being negotiated, with Solomon Islands pushing for weaker language to be used.

There’s also a reference to maintaining peace in stability “in the Indo-Pacific, including across the Taiwan Strait” – although some close observers predict that reference may be deleted in the final version.

Earlier this year Vice-President Kamala Harris announced the U.S would boost economic assistance to the Forum Fisheries Agency, as well as opening new embassies in Tonga and Kiribati while relaunching the Peace Corps in the Pacific.

A senior administration official told journalists that the White House summit was “unprecedented” and signalled the US government’s determination to lift its game in the Pacific.

“The president and secretary of state will be basically unveiling … substantial new initiatives, new funding that will affect every element of government purpose from our compact negotiations to the Peace Corps to USAID,” they said.

The senior official said the Pacific’s “demand signal” for greater U.S involvement in the region was “louder and clearer than it ever has been”.

“The United States is a responsible country and understands that the need for deeper, more sustained American engagement.”

The senior official also declined to comment directly on the decision by Solomon Islands not to join the declaration, saying simply that the U.S was “patient and fully committed to working in close consultation with Pacific Island nations on the issues that we both think are critical going forward.”

Dr Anna Powles from Massey University told the ABC the draft declaration “reveals Washington’s desire to move fast and decisively in the Pacific” but said the U.S “needs to be careful not to leave the region behind.”

“The draft declaration is revealing in what it tells us about the constraints and limits of US engagement and action as well as the clear position that Pacific countries are taking with respect to Forum centrality and their’ red lines’ when it comes to climate change and the sovereignty and national interest of member states,” she said.

FBI sent to the Pacific as U.S, Australia and Japan stand...