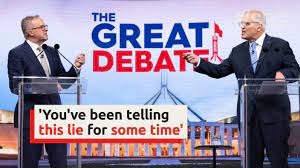 Solomon Islands’ signing of a significant security pact with China has made foreign aid a key election issue and brought into question Australia’s role in the Asia-Pacific.

But when you ask him who helps fund his work, it’s not Australia, but a country halfway around the globe.

“Seeing that the United Kingdom is on the other side of the world and we are very close neighbours I was hoping the Australian government could invest a bit more providing oxygen for children in the Solomon Islands,” he told SBS News.

For Solomon Islanders, it was a sign of China’s growing influence in their backyard.

“I think there’s a feeling of uncertainty we are not sure what is going to happen there is a general feeling out there in the population. But time will tell. I don’t know how this arrangement will unfold,” Dr Ogaoga said.

After decades of intense engagement with the Pacific, Australia’s overall foreign aid budget has fallen to historic lows.

In the Solomons, funding dropped dramatically after the 2017 departure of Australian security forces as part of the Regional Assistance Mission to Solomon Islands (RAMSI).

Mark Cubit is co-founder of the Australian International Development Network, which seeks for Australia to contribute more to developing countries.

“Money talks, whether that’s giving a tax cut ahead of an election to garner domestic votes or whether that’s in regard to assisting our neighbours who are considerably poorer than ourselves – so if we haven’t got the dollars to spend we are going to lose influence,” he told SBS News.

Australia now ranks 24th out of the 38 OECD countries on its aid spending.

Labor is promising to increase foreign aid to the Pacific by $525 million (US$365 million) over four years.

The Coalition plans to keep foreign aid to the Indo-Pacific region stable at around $4 billion (US$2.7 billion), but has also announced a one-off Budget measure of $460 million for the region, which recognises “the complex challenges we face in our strategic environment.”

“That trend has continued under the Morrison government and even now the government is only instituting indexation for 2.5 percent growth in that budget, which as we know is not enough to cover inflation,” Cubit said.

Research fellow at the Lowy Institute, Alex Dayant, is among those calling for a complete re-look at how Australia engages with its Pacific neighbours

“We need to be creative in how we’re engaging with the region, we need to look beyond aid, we need to further economic partnerships… maybe open our labour markets to Pacific Islanders,” he told SBS News.

One thing experts do seem to agree on is that much of Australia’s future in security and economic prosperity will rely on good relations and some influence in Pacific affairs..

The UN in RMI, the nuclear legacy, climate justice and the...