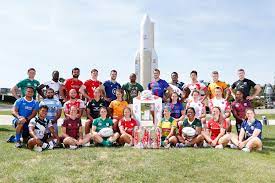 The 12 women’s and 16 men’s captains got ready for lift off as they lined up in front of the Ariane 5 space rocket at Space City on Wednesday ahead of the HSBC France Sevens, which is taking place in Toulouse for the first time.

Rugby fans in France and around the world can look forward to being entertained by the full roster of women’s and men’s teams over three days of thrilling, high octane rugby sevens action on 20-22 May at Stade Ernest Wallon.

Toulouse is the grand finale of the women’s Series and while Australia have already claimed the 2022 title, the return of Olympic gold medallists New Zealand and bronze medallists Fiji sees the women’s competition back to full strength. The USA, France and Ireland are in contention for the other Series podium positions while Spain and Brazil will be battling hard to avoid relegation to the Challenger Series.

With four victories from the opening five rounds Australia were confirmed as women’s Series champions at the last round in Langford, Canada, where they beat rivals New Zealand in a pulsating final. The unique scoring system for 2022 sees only the four best results from each team count towards their final Series standings.

In Toulouse Australia are in Pool A together with the USA, who claimed gold in round three in Malaga, Spain on the only occasion Australia did not top the podium so far this Series. Olympic bronze medallists Fiji and invitational team South Africa will provide the opposition in a mouthwatering line-up.

Australia women’s captain Demi Hayes said: “After coming from Canada we are really excited to finish off the Series here in France, it is such a beautiful city and we can’t wait to play in front of the fans. We came in to the Series and set out to win the title we we’re really happy and can’t wait to finish it off here in the hot sun.”

Olympic champions New Zealand who returned to the Series in fine form in Langford will face Canada, Spain and invitational team Scotland in pool B. In pool C Ireland, bronze medallists in Langford, are up against hosts and Olympic silver medallists France, along with England and Brazil who will be aiming to gain vital Series ranking points in order to move out of the relegation position they currently occupy.

France women’s captain Jade Ulutule said: “We are very excited as it has been a long time since we last played in France so we are very happy and excited for this weekend. Our goal is to make the final and if we can win our first tournament in France it would be amazing.”

In the men’s Series it is still all to play for with six of the nine rounds completed. The unique scoring system for 2022 means only the best seven results from the nine rounds will count towards each team’s final Series standings.

The 2021 Series champions South Africa continued their unstoppable form with four consecutive tournament victories at the start of the 2022 Series to lead the standings with 111 points. However the return of Olympic Champions Fiji and 2020 Series title winners New Zealand along with Samoa following enforced absences due to the logistical challenges of Covid-19 means that fans can expect a hotly contested event in Toulouse.

Argentina will arrive in confident mood on 105 Series points following their victory in Vancouver and Los Pumas Sevens are in men’s Pool A together with England, Canada and Japan.

Argentina men’s captain Gaston Revol said: “We have arrived on Monday and are preparing well for the tournament. We are always looking to continue to improve our game and performances. We had a very good result in Vancouver and we would like to repeat it here in France.”

Men’s pool B sees double Olympic champions Fiji take on hosts France along with Wales and Kenya. In a tough looking Pool C, third ranked Australia, who have 100 Series points, are paired with New Zealand, Scotland and the USA.

Current Series leaders South Africa will be looking to bounce back to their dominant early season form in Pool D where they will play the impressive Samoa, Ireland and Spain.

The HSBC World Rugby Sevens Series arrives in Toulouse at a very exciting time for rugby in France as the country is set to host Rugby World Cup 2023 ahead of the Olympic Games Paris 2024 when France’s women will be hoping to repeat their impressive medal success achieved in Tokyo last year.

Before then, 2022 is a huge year for rugby sevens. Alongside the Series, the Commonwealth Games will take place in Birmingham, England on 29-31 July, and following the grand finale of the men’s Series in Los Angeles on 27-28 August, all eyes will turn to Cape Town, South Africa for what promises to be a record-breaking Rugby World Cup Sevens 2022 on 9-11 September.

With the women’s series concluding on Sunday, participating teams present in Toulouse will attend the HSBC World Rugby Women’s Sevens Series Awards in the evening to recognise and celebrate the achievements of those involved in the 2022 competition.

Having already clinched the title in Langford, Australian players are strong contenders for some of the prestigious awards. Fans are invited to vote for the Women’s Try of the Year winner between nominees Portia Woodman (New Zealand), Lily Dick (Australia) and Amee-Leigh Murphy Crowe (Ireland) on World Rugby Sevens’ social media channels (https://twitter.com/WorldRugby7s). The ceremony will be hosted in Toulouse’s Centre des Congrès on the evening of Sunday 22 May.