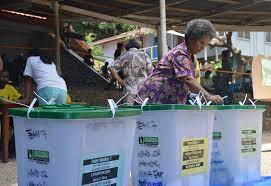 Transparency International PNG has described the accumulated failures in the preparation, conduct, delivery and conclusion of the National General Election as being a severely flawed process.

The findings were based on observation reports from more than 340 observers deployed during the polling period. TIPNG has released a summary paper outlining its initial assessment of the 2022 NGE and drawing from these findings, TIPNG is calling for a genuine commitment from all stakeholders to undertake major reforms of our electoral process and systems to avoid similar problems in 2027.

“The Electoral Commission and the government must not be complacent as the numerous problems experienced during 2022, should be a wake-up call for our nation’s leaders and administrators to take action,” TIPNG chair Peter Aitsi said in a statement.

“In launching its summary paper on the 2022 NGE, TIPNG highlights detailed recommendations for consideration in improving the electoral process.

“This will require a structured intervention to restore public trust and demonstrate greater levels of competency. There is a five-year electoral planning cycle and that must be properly supported on an annual basis. The issues of 2022 will not be resolved through quick fixes, which run the risk of further depleting limited public funding for this essential democratic process.

‘‘In undertaking post-election analysis, all stakeholders should focus on structured long-term interventions that will promote transparency and integrity in PNG’s national elections.”

Key issues identified during the 2022 NGE included frequent instances of roll inaccuracy, lack of enforcement against election offences, non-compliance with Constitutional requirements, disturbances in the conduct of the ballot counting, confusion on the declaration of seats, and widespread election-related violence.

These issues will be discussed in the full TIPNG 2022 Election Observation Report to be launched in November 2022.

In its preliminary assessment, TIPNG recommended interventions including:

– Developing a five-year Electoral Commission communications plan to empower voters and electoral partners;
– Prosecution of electoral officials that were alleged to have engaged in corruption during the 2022 NGE, and,
– Developing a public complaints process and an internal anti-corruption strategy within the PNGEC prior to the 2027 NGE.SOURCE:POST COURIER/PACNEWS

‘Election will be held in the not too distant future’: Fiji...