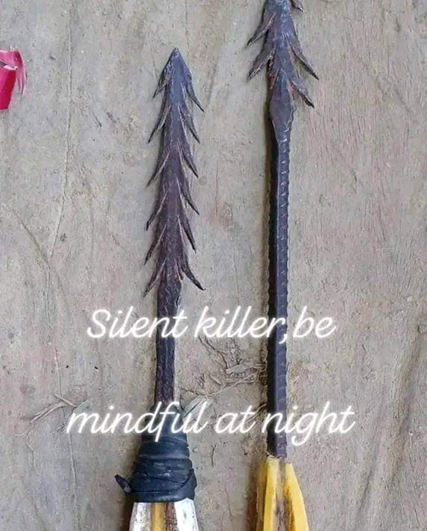 The rise in the use of a newly invented weapon called the wire-catapult or “silencer” is a big concern for East Sepik Province in Papua New Guinea, says East Sepik Provincial Police Commander (PPC) Superintendent Albert Beli.

The wire-catapult, which the locals call the ‘silencer’, was invented by the people from the Sepik River for fishing purposes but is now being used as a weapon to attack human beings.

It is used like a sniper weapon where people would hide and propel the wire from a distance at their targets. The wires used are made from thin rods (deform steel bars) that are sharpened and have little hooks at the tip. The wires are put into slingshots and released towards their target causing grievous bodily harm and even death.

PPC Beli believes those practising this criminal act are mainly youths under the influence of homebrew and other drugs. He said they are not only attacking their enemies but even innocent people for no reason at all.

The Surgeon for the East Sepik Health Authority, Dr Mitchell Masin, said in an interview with the Police Media Unit that the use of wire catapult is very dangerous and has contributed to the increase of emergency surgical cases as per the 2021 statistics in the East Sepik Province.

“The standard of the surgical ward is to operate on more elective cases like people with cancer and tumours that are growing in them or some other pathologies than emergency cases. However, in East Sepik Province we have more emergency cases. In 2021 alone we recorded 715 cases of which 500 (70%) of these cases were trauma cases and were mainly caused by the use of wire-catapult and bush knives alone,” says Dr Masin.

He said, “The locals call it a “silencer” because, you do not hear it like how you hear gunshots and before you know it you have a wire sticking in your lungs or brain or even in your aorta.

“The wires are sharpened and designed in a way that it is difficult to remove once penetrated through the human body as it has 2-6 hooks at the edge of it and cannot be pulled back.

“It is difficult for people as well as the surgeons in the operating theatre to remove the wires from a person’s body because the hooks are attached to the underlying tissues. So, every time someone is injured by a wire-catapult, we have to remove all the surrounding tissues surgically, free up the hooks and remove the wire.

“The difficult part of this experience is when the hooks are sitting near major blood vessels like the aorta, the major arteries or the major veins where sometimes when we try to remove them, the hooks puncture the veins and the arteries of which the patient can bleed out and die.

“I recently lost a patient that was shot on his aorta and when I removed the wire, he bled out on me and died on the operation table,” Dr Masin said.

PPC Beli said this has been an ongoing issue and police have dealt with some cases however the people, especially the youths are still using this as a weapon to attack other people.

He urged parents and community leaders to help police discipline youths at home and in the communities and to bring the perpetrators to the attention of police to have them arrested and charged.

Dr Masin added that most of his patients when interviewed on what caused the issue leading to their injuries said it all started from little arguments at home over simple matters that could have been resolved easily.

“Most of these cases were not caused by big fights between warring communities, it was all matters like brother coming home hungry to sister not cooking which led to arguments and eventually injuring each other with this so-called wire-catapult,” Dr Masin said.

He said because these weapons are easily concealed, they are carried around in public under the shirt or trousers and when disagreement arises on simple matters they are taken out and used as weapons to attack.

“It is becoming a norm, the attitude is passed to everybody,” said Dr Masin.

Dr Masin appealed strongly for appropriate laws to be in place to prevent the use and carriage of sharp objects publicly such as the wire-catapult.