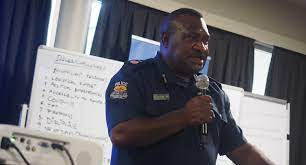 Papua New Guinea Police are ready to deliver the 2022 National General Elections despite manpower and resource issues next year.

This was the general conclusion made by the various divisional and provincial police commanders when presenting an overview of their supplementary orders to the Police Commissioner’s General Orders at the National Election security planning conference in Port Moresby.

NCD and Central Assistant Commissioner Anthony Wagambie Jr said during his presentation that the constabulary was prepared and ready to deliver the 2022 National General Election.

They have very experienced senior officers who have taken part in previous elections so they are confident that they will deliver in 2022, he said.

Wagambie said the officers had also been running elections, including major operations and so were confident of delivering a safe and secure 2022 National General Election for the people of PNG.

“Despite the preparations, the constabulary would still face problems with logistics, manpower and funding. These resources are very important for major operations such as the national elections,” he said.

However, Wagambie reassured the senior police officers as well as the nation that they would still deliver despite the challenges.

He said they needed a massive awareness campaign to be carried out to ensure they establish community trust and confidence, as well as contacts with the people at the community level.

He said awareness was really important, especially in the Highlands.

Tondop was confident that the security agencies would deliver a free, safe and corruption free 2022 National General Election if they could get the pre-election operations done on time.

“We are four months away from the issue of writs and urgently require funding to be made available on time to start to prepare and deliver their pre-election campaign,” he said.

Tondop said with or without resources they would still conduct the awareness campaign and run the election security operations.