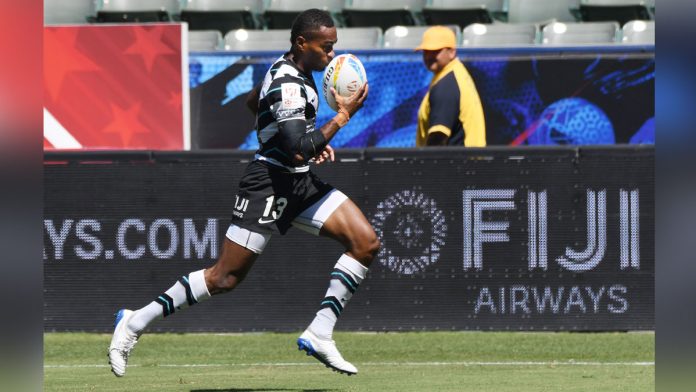 The Fiji Airways Fiji 7s side will play New Zealand in the Cup final of the Los Angeles tournament.

This after Fiji beat a spirited Australia side 29-10 in the cup semi-final.

A try after the final hooter for skipper Sione Molia has sent New Zealand through to the final of the Los Angeles Sevens tournament in Carson with a thrilling 28-26 semifinal victory over Samoa.

The Kiwis overcame two yellow cards and a 26-14 second-half deficit to get up in the final moments of a freeflowing semifinal on Monday ), decided when Molia ghosted through a tiring Samoan defence for the decisive score.

Samoa had looked in control as they ran in first-half tries to Steve Onosai, Vaa Apelu Maliko and Uaina Sione to lead 19-7 at the break, with Akuila Rokolisoa reurning from an early sinbin for the New Zealanders’ only score of the spell.

Rokolisoa completed his brace early in the second spell to get the Kiws within five, but a yellow card to Lewis Ormond and runaway try to Paul Scanlan put the Samoans back in control at 26-14.

However the New Zealanders owned the championship minutes of a surging semi, Kurt Baker crossing to finish some good leadup work from Tone Ng Shiu and Moses Leo, and then Molia applying the finishing touches after Ormond made the key play to win possession off the restart.

Clark Laidlaw’s men will meet Fiji in the final after the Pacific Islanders defeated Australia 29-10 in the other semifinal.

The Fijians led just 12-10 at the half after early tries to Waisea Nacuqu and Jerry Tuwaii were answered by touchdowns for Henry Paterson and an acrobatic finish in the corner by James Turner.

But the sevens masters took control in the second spell as Filipe Sauturaga, Joseva Talacolo and Kaminieli Rasaku all crossed for tries, with the Australians having no answer to to the athleticism and physicality of their opponents.

Earlier New Zealand continued their strong form from an unbeaten pool effort by storming into the semifinals with a 29-14 defeat of Ireland in the quarterfinals.

New Zealand have never lost to Ireland on the sevens world circuit and were in command from the opening whistle when veteran Joe Webber scored from the kickoff. Webber pulled a hamstring scoring the try.

New Zealand were never in trouble against the Irish as they led 24-0 at halftime and ran in five tries for another impressive win in this final world series tournament of the season.

Samoa needed extra time to get past Argentina 24-19 and qualify for the semifinal.

In the earlier quarterfinals Australia thumped Kenya 40-12 to set up a semifinal meeting with Fiji who got past the United States 28-12.

Though not in the running for the overall title, sitting ninth of 19 teams in the standings after Covid-19 saw them miss the first four of the nine legs, Laidlaw’s New Zealand side are flexing their muscles ahead of the World Cup after finishing third at the Commonwealth Games.

In missing the knockout stage, the defending champion South Africans have left the championship door open for Australia to claim a maiden series title, should they claim a top-three finish.

Fiji Warriors to ‘step it up a notch’ says Leawere