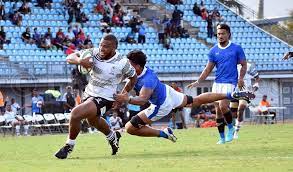 The gloomy Suva weather did not dampen the spirits of fans who turned up to witness our Swire Shipping Fijian Warriors defeat Manuma Samoa 60-10 at the HFC Bank Stadium Saturday.

The best in Pacific rugby was on display as both teams showed great physicality and passion.

Samoa’s Ailepata Lemalu crossed over 14 minutes into half from a maul at lineout with the conversion missed from inside centre Faletoi Peni. Samoa lead 5-0.

The Warriors fought hard enabling number eight, Ilikimi Torosi to dive over in the right corner with the conversion missed from halfback Simione Kurivoli tying the score sheets 5-all.

Samoa had a few chances to cash in a try but the Warriors pounced on the opportunity of a knock on from the Samoan side driving them back into their own 22.

The Samoan’s held their ground but conceded a penalty as Kuruvoli kindly slotted another three to make it 8-5.

The Warriors kept the momentum where flanker Joji Kunavula dived over for his first ever try with Kuruvoli adding the extras, 10 minutes from halftime.

Fiji lead 15-5. A few minutes later, outside centre Apisalome Vota threw an offload out to winger Paul Dolokoto, who barged his way to the tryline a few minutes from the halftime hooter.

Kuruvoli added the extras and the Warriors lead 22-5 at halftime.

The home side came out firing in the second half with Skipper, Tevita Ikanivere crossing over for a try a few minutes in. Kuruvoli unfortunately missed the conversion with Fiji leading 27-5. Samoa were pressured at their tryline with Louis Saena failing to find touch.

Warriors flyhalf Peni Kadralevu scored a try weaving his way through the Samoan defence with fullback Jack Volavola failing to add the extras, with a 32-5 lead. Samoa piled on the pressure with replacement flanker Paul Fa’alogo adding to their tally.

Dolokoto’s Warriors debut was cut short with the young fellow sustaining an ankle injury. Kuruvoli, who shifted from halfback to flyhalf in the second half, made a good linebreak from halfway to enable Volavola to dive over for a try.

The fullback converted his own try extending their lead to 39-10. A few minutes later, Ikanivere had a double breaking the Samoan defence with Volavola adding the conversion. Fiji lead 46-10, 18 minutes into the second half.

Kunavula also had a double in yesterday’s match with Nadi sharp shooter, Tevita Mociu adding the extras, extending their lead 53-10.

The Warriors closed off the match in style with inside centre Michael Naitokani weaving his way through the Samoan’s defence with Mociu adding to his tally.

“I would like to thank the Lord for giving us the strength to play our best,” Ikanivere said.

“A special mention goes out to all these young players. They showed their talents here today (Saturday). I am very thankful to them for coming out and displaying their best, playing in front of their home crowd and coming out with the win.”.