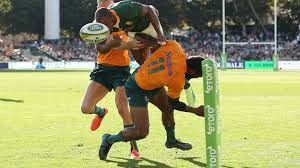 While his Wallabies teammates describe him as a “freak” and his coach says he’s never seen a winger like him, Marika Koroibete says he’s just repaying Australia for all it has given his family.

The Australians clinched a 25-17 victory over South Africa at Adelaide Oval on Saturday to keep alive their chances of winning the Rugby Championship.

Man of the match Koroibete was integral, the Fijian flyer mobbed by his Wallabies teammates after pulling off a massive hit that stopped a certain Springboks try.

He then scored himself early in the second half to help the home side to the rousing win.

With fellow winger Tom Wright in the sin bin, the Australians were under heavy fire late in the first half and South Africa spread the ball wide to Makazole Mapimpi.

As he charged to the line Koroibete sprinted 40 metres from his own wing and smashed Mapimpi, who spilt the ball as he flew through the air.

Wallabies coach Dave Rennie said the former NRL star, who has now played 48 Tests, always gave his all to the team.

“He’s incredible and what you see on Saturdays is what you see every day at training – he is just full on,” Rennie said.

“If we kick a ball, he is at full pace chasing, he is concrete when he hits, his work ethic is phenomenal, I haven’t seen another winger like it.

“He’s not a big man but powerful and and he’s all over the park. You have a look at his numbers, they’re outrageous.”

Wallabies five-eighth Noah Lolesio said he was happy that he didn’t have to try and stop Koroibete.

“I’m just happy that I’m one of his teammates, not opposing him … I reckon he’s the best winger in the world.”

Koroibete grew up on a remote family farm in Fiji and moved to Australia to play league in 2011.

He switched to rugby in 2017 and three years later won the John Eales Medal as Australia’s best player.

Shifting his career to Japan this year, Koroibete had to rely on being one of three overseas player picks, which he described as a privilege.

And Koroibete said he wanted to repay his adopted country.

“As a kid growing up in Fiji and come over to Australia, it’s given a lot to me and my family,” he said.

“Just to give back to the country after what it’s done for me and my family. It’s for my teammates and the coaching staff.”

While Koroibete’s tackle was the talk of Adelaide, he said he was just doing his job.

“The tackle had to be made – we got a man in the bin and I have to cover his side and make that cover (tackle).

“I was just running and I knew he wasn’t going to step he was going to go for the corner so I put my head there and hoped for the best.

“We spoke this week about effort and working for each other. The forwards do their job, ruck, mauling and those sort of things and backs we have to do our job.”.