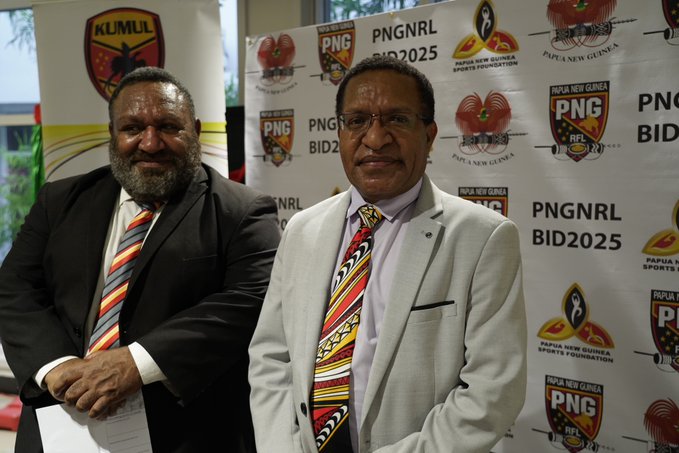 Papua New Guinea has launched a bid to join the NRL as the competition’s 18th team in the next broadcast cycle, receiving the backing of the country’s prime minister.

As the NRL awaits the introduction of the Dolphins as the 17th team next year, Papua New Guinea has put its hand up for the license of the 18th club.

The PNG government, along with local governing body PNG Rugby Football League (PNGRFL) and the country’s Sports Foundation, officially launched a campaign to enter a team at an event in Port Moresby on Wednesday night.

PNG says it is working to be able “to demonstrate strong credentials as a prospective participant by 2025”, with the aim to join the league by 2030.

The bid will 2celebrate and showcase PNG’s passion for the game, sporting talent and events hosting capability”, it says.

The bid has been backed by PNG’s Prime Minister and its cabinet, with the country’s Sports Minister on hand at the launch.

“Sport is part of the fabric of Papua New Guinea,” the minister, Wesley Raminai, said.

PNG is the only country in the world where rugby league is the national sport.

The country already has a team, The Hunters, competing in a lower-tier league in Queensland and its national side, The Kumuls, is currently ranked fifth in the world.

Rugby league powerbrokers want to make the NRL an 18-team competition at some point in the future, but it’s hard to envisage that happening before the upcoming broadcast agreement ends after the 2027 season.

The NRL had previously discussed a second team in New Zealand along with the Warriors, however PNG believed they would be ready to go with a team from 2025. Rugby league is the national sport in the country. Other options include a team in Perth or on NSW’s Central Coast.

The PNG bid, backed by prime minister James Marape, was also open to becoming the team of the Pacific, linking with countries like Fiji, Tonga and Samoa to join forces. Rugby league is the national sport of PNG.

“The investment and work we’ve done over the last 12 years with our infrastructure, governance and financial capacity and competitiveness of the sport in the country has put us in a good position,” PNG Rugby League chairman Sandis Tsaka said.

“Investment in the domestic game in terms of football structures from our juniors to elite pathways program has led to the success we’re having with the Hunters [who currently play in the Queensland Cup].

“Our men’s and women’s international teams are becoming competitive. Investment we’ve done across the game in terms of infrastructure has us in good stead to put in a good bid.

“We know there are other teams within Australia and New Zealand that have put their hand up. It will be a competitive process. For us it’s about getting our work done, so we can put in a bid that can compete and be selected to be the 18th team in the NRL. We are confident we can do that.”

Tsaka said they would work with stakeholders and partners on commercial strategies and planning as it would cost “significantly more” than K30m (US$8.5 million) to launch a team.

A transformational and historic moment for Fiji Rugby as the Fijian...