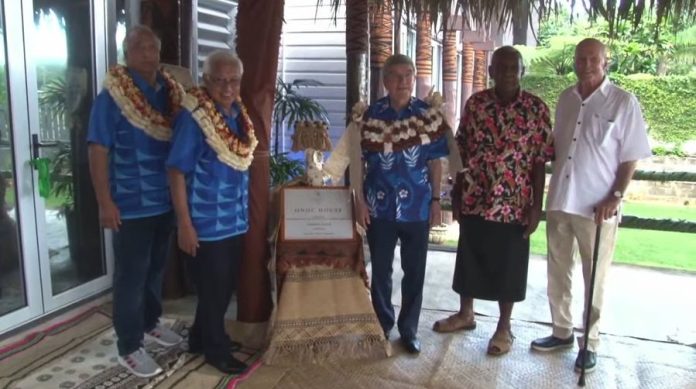 Bach was among the attendees at a ceremony to mark the opening of the building, located at Gladstone Road in the Fijian capital’s city.

The building will be ONOC’s first headquarters, with the organisation saying the opening marked one of its biggest milestones.

The opening comes as ONOC celebrates its 40th anniversary.

“It is a day of pride, a day of joy,” Bach said during the ceremony.

“I would like to congratulate the ONOC President Robin Mitchell for this great achievement of after 41 years, finally having a real home and being supported by your secretary general Ricardo Blas building this home for the Olympic family in Oceania.

“It reminds me a bit of when three years ago when we were able to open our Olympic House in Lausanne.

“I can still feel the anticipation and satisfaction of having achievement such a milestone in your organisation.”

“This will be the home of everyone in the Oceania National Olympic Committees, where everyone can feel very much welcome,” Bach added.

“This home will be a great inspiration working in ONOC and in the new headquarters, as you can plan a greater and brighter future for athletes in the region and ONOC.

“You will feel inspired by the togetherness and the feeling to work for more excellence in all areas of your activities.

“You will be inspired by an outlook 10 years from now, when the Brisbane 2032 Olympic Games take place in Oceania.

“The Olympic spirit is alive in Oceania all the time.”

The IOC President also participated in a ribbon cutting ceremony at the headquarters, while a plaque was unveiled to commemorate the occasion.

The headquarters lies opposite Albert Park, a centre for Suva’s sporting and physically active community.

The building faces the Grand Pacific Hotel and the waterfront with the Fijian Government buildings and clock tower located on its right.

The Thurston Gardens and the Fiji Museum are to the left of the building.

A 40th anniversary dinner was held by ONOC at the Grand Pacific Hotel, marking the end of a week of events.

The organisation’s annual General Assembly was held Tuesday, where Dr Robin Mitchell was re-elected as President of the continental body.