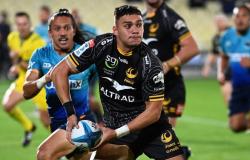 Western Force have kept their Super Rugby Pacific finals hopes alive after snapping their losing streak with a key 48-28 win over Moana Pasifika.

Playing their postponed round-10 match on Tuesday night in Auckland, the Force ran in seven tries to also collect a vital bonus point.

That came in the 78th minute when Kyle Godwin ran on to a break by star winger Manasa Mataele to touch down to the delight of his teammates.

The result meant the men from Perth have moved into ninth position on the ladder, three points behind the Highlanders with the top eight playing finals.

With five points on offer – four for a win and a bonus point for scoring three or more tries than the opposition, they now need to beat the fifth-placed Hurricanes on Saturday night and rely on 10th-placed Melbourne to beat the Highlanders on Sunday.

Skipper Ian Prior said it was a huge ask to back up after a heavy loss to the Chiefs – their seventh in succession – and travel to New Zealand.

“It’s been a tough couple of weeks with a couple of big scorecards, but I’m immensely proud of the group,” the veteran halfback told Stan Sport.

“We’ve talked about responding from a short turnaround as well.

“It’s going to be really special to get home back in front of our home crowd and give ourselves the best chance possible to try and stick in the finals there.”

The Force set up the win on the back of a dominant set piece and some steely defence to shut down their athletic opponents, while showing some endeavour in attack.

But they lost centre Levi Aumua to a yellow card for an ugly lifting tackle on Richard Kahui.

Centre Byron Ralston then crossed right on halftime, with Ian Prior adding the extras to secure a 19-14 buffer.

The Force extended that lead to 20 points through Toni Pulu, McIntyre’s second and Jackson Pugh and it looked like they had the bonus point in their keeping.

But Moana Pasifika kept them on their toes with a 69th-minute try to Tau Koloamatangi.

That set up a thrilling finish with the Force needing to cross again to get the extra point, with Godwin coming up trumps.